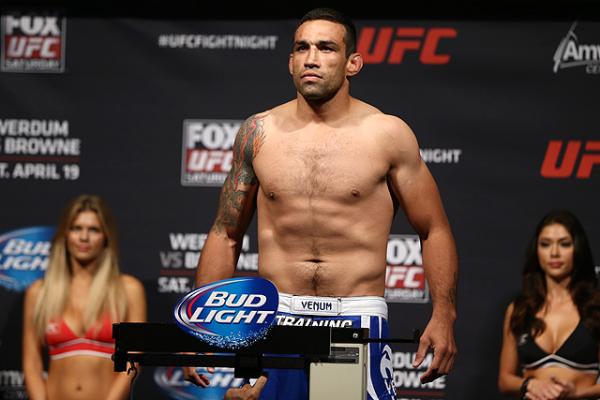 Werdum became the 14th undisputed UFC heavyweight champion on June 13, unifying his interim title with that of two-time champ Cain Velasquez by submitting the American Kickboxing Academy star via a third-round guillotine choke. Once considered a one-dimensional grappler with limited striking, the Brazilian jiu-jitsu black belt has evolved into a well-rounded mixed martial artist, as evidenced by the potent standup which precipitated his finish of Velasquez and previous stoppage of Mark Hunt. Since rejoining the UFC three years ago, Werdum has gone 6-0 with two submissions and two knockouts. A rematch with Velasquez appears to be next on the horizon, possibly on Super Bowl weekend in February.

Returning from an injury-laden layoff of nearly two years, Velasquez struggled mightily and ultimately surrendered his heavyweight crown to Fabricio Werdum at UFC 188. Whether due to ring rust or the Mexico City altitude, Velasquez faded fast after the opening round; by the third frame, Werdum’s strikes rocked him into an ill-advised takedown attempt which ended in a guillotine choke submission. It was the first submission loss of Velasquez’s career and his first defeat since falling to Junior dos Santos in November 2011. The American Kickboxing Academy ace appears to be in line for a rematch with Werdum, but it appears as though the two heavyweights will wait until February to renew acquaintances.

Dos Santos continues to beat every UFC heavyweight not named Cain Velasquez. “Cigano” did not have an easy time on Dec. 13, but the Brazilian weathered an early assault from Stipe Miocic and came on strong in the latter frames of their five-round affair to earn a unanimous decision. While another title shot remains out of reach for the time being, dos Santos’ well-honed boxing and seemingly unbreakable chin make him a tough matchup for any man in the division. He will return to the cage in December, when he faces Alistair Overeem at UFC on Fox 17.

Miocic was utterly dominant in his victory over Mark Hunt on May 10, mauling the famously durable kickboxer with ground-and-pound for the better part of five rounds before finally earning an overdue referee stoppage. The win saw the Ohioan rebound from a grueling December loss against Junior dos Santos. Now 7-2 inside the Octagon, Miocic continues to inch closer to title contention. Next up: a date with Andrei Arlovski at UFC 195 on Jan. 2.

Though his performance left much to be desired, Arlovski got past fellow former champion Frank Mir in the UFC 191 co-main event on Sept. 5, as he took a unanimous decision at the MGM Grand Garden Arena in Las Vegas. The resurgent “Pit Bull” has now won six consecutive fights overall and improved to 4-0 since returning to the UFC in June 2014. He will carry that momentum into a Jan. 2 showdown with Stipe Miocic at UFC 195.

Browne came up on the wrong end of a back-and-forth brawl with Andrei Arlovski at UFC 187, succumbing to punches from the ex-UFC champ late in the first round. It was just the second stoppage loss in 21 professional fights for the towering Hawaiian, who holds a record of 4-2 with four knockouts over the past two years. Browne will return to action on Jan. 17, when he faces Matt Mitrione at a UFC Fight Night event in Boston.

Rothwell used an unorthodox guillotine choke to submit hard-hitting Matt Mitrione on June 6, propelling the 15-year veteran up the ranks in the UFC’s wide-open heavyweight division. It was the Wisconsinite’s third win in as many years, following stoppages of Alistair Overeem and Brandon Vera. Rothwell will take on former UFC champion Josh Barnett at UFC on Fox 18 in January.

Hunt rebounded from the worst beating of his career against Stipe Miocic to torch Antonio Silva at UFC 193. In the long-awaited rematch of their five-round majority draw in December 2013, Hunt took out “Bigfoot” with a glancing but concussive right hand to the side of the head and follow-up punches just 3:41 into the first round. The 41-year-old “Super Samoan” has gone 2-2 in his last four appearances, with wins over Silva and Roy Nelson sandwiched around losses to Miocic and Fabricio Werdum.

Overeem had an up-and-down 2014, a loss to Ben Rothwell sandwiched between wins over Frank Mir and Stefan Struve. The powerful Dutchman got his 2015 campaign off to a good start on March 14 with a sterling three-round performance against Roy Nelson in which he outstruck “Big Country” nearly three to one. His victory against Nelson put Overeem on the first winning streak of his UFC career. The former Strikeforce champion will put that streak on the line against Junior dos Santos at UFC on Fox 17.

Bellator’s unbeaten heavyweight champion is back, but he is not competing inside the Bellator MMA cage. Minakov remains under contract with the stateside promotion, though the two parties have reached a “stalemate” regarding his next fight, according to the fighter’s management. In the meantime, Minakov has kept busy with a pair of fights in his native Russia, including an effortless Sept. 25 submission of onetime UFC signee Geronimo dos Santos.