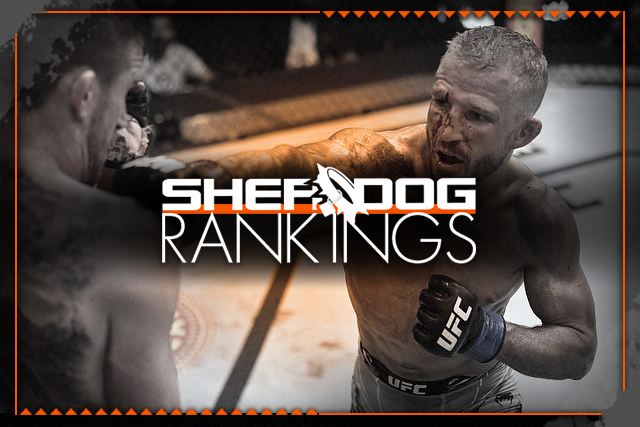 
After two and a half years away, T.J. Dillashaw stakes out a familiar spot in the 135-pound rankings.

In the main event of UFC on ESPN 27, the former two-time UFC bantamweight champ returned from his lengthy suspension for banned performance enhancer EPO and won a split decision over a Top 5 contender in Cory Sandhagen. While opinions are divided over whether the right fighter prevailed, what is beyond dispute is that Dillashaw showed himself capable of hanging with a red-hot younger contender. As such, the 35-year-old Treigning Lab export is immediately a person of interest in the division once again, and re-enters the Sherdog men’s bantamweight rankings at No. 4.

At the same “UFC Vegas 32,” No. 14 middleweight Brendan Allen took a unanimous decision over the previously undefeated Punahele Soriano, leveraging his superior cardio and sharper, more varied striking. However, “All In” remains parked for the moment behind No. 13 Uriah Hall and his four-fight win streak.