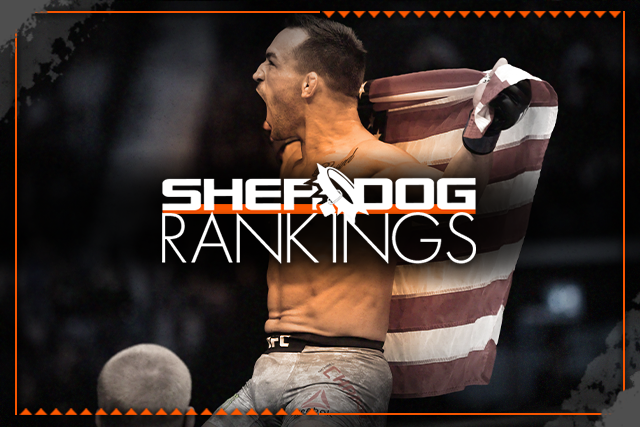 
Michael Chandler lived up to the hype — and then some.

The former Bellator MMA lightweight king was one of the Ultimate Fighting Championship’s more celebrated free-agent signings in recent months and he was given prominent placement on the UFC 257 card as result, in the co-main event just below pay-per-view buy magnet Conor McGregor. The moment wasn’t too big for Chandler, as he plowed through Dan Hooker inside of a round to catapult himself to No. 7 in Sherdog.com's latest lightweight rankings. Chandler’s ascent also benefits the man who dethroned him, Patricio Freire, who takes the sixth spot thanks to a quick stoppage of the University of Missouri Tiger under the Bellator banner in May 2019.

In a busy MMA week, there was also some movement on the women’s side of the rankings. Julianna Pena moved up from 13th to ninth at bantamweight by submitting former title challenger Sara McMann at UFC 257, while Joanne Calderwood moved into the Top 10 at flyweight by besting Jessica Eye on the same card. Meanwhile, thanks to a dominant win over Roxanne Modafferi at UFC on ESPN 20 in the middle of the week, Viviane Araujo joins the 125-pound bubble.

Elsewhere, Michael Chiesa’s clear-cut decision win over Neil Magny in the UFC on ESPN 20 main event extended his welterweight winning streak to four. However, he remains stuck at seventh in the rankings in what is a talented division at the top.