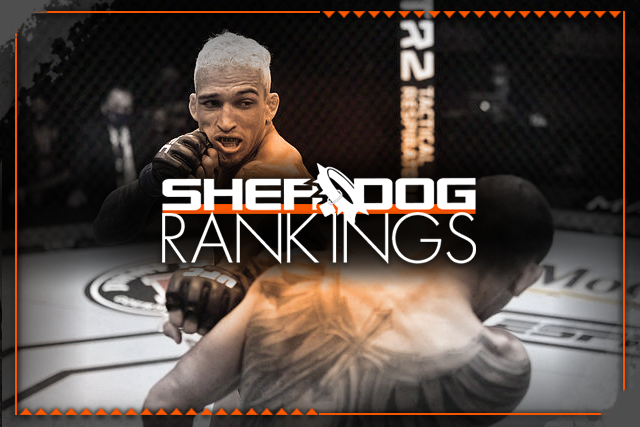 
Charles Oliveira wanted to prove he belonged at the forefront of the title discussion in the Ultimate Fighting Championship’s lightweight division. Consider that mission accomplished.

Oliveira dominated — and nearly finished — former interim title holder Tony Ferguson in the UFC 256 co-headliner, winning a lopsided unanimous verdict at the UFC Apex in Las Vegas on Saturday night. With the win, “Do Bronx” moves to No. 4 in Sherdog’s latest lightweight rankings, and he’s breathing down third-ranked Justin Gaethje’s neck thanks to an eight-bout winning streak that features seven finishes. Oliveira has already called his next shot: a meeting with the winner of the Conor McGregor-Dustin Poirier showdown at UFC 257.

It was also a weekend for new blood in our divisional rankings, as we’d like to welcome new Bellator flyweight queen Juliana Velasquez (No. 2 at 125 pounds), Ciryl Gane (No. 10 at heavyweight) and Kevin Holland (No. 10 at middleweight) to the Top 10 of their respective divisions for the first time.