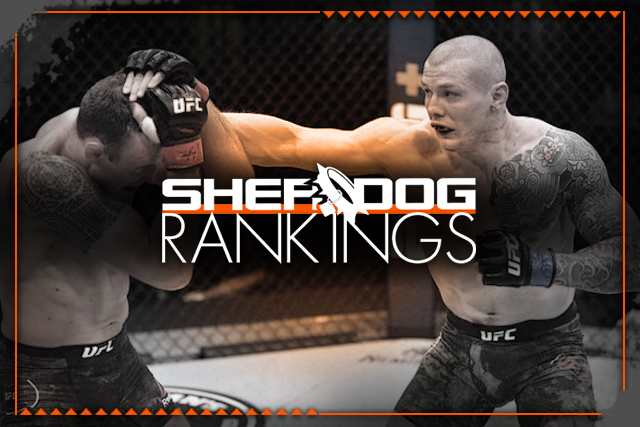 
Marvin Vettori might have been the third option among potential opponents for Jack Hermansson at UFC on ESPN 19, but he looked to be nothing short of a top-flight 185-pound talent in dispatching “The Joker” via unanimous decision in Saturday’s main event at the UFC Apex in Las Vegas on Saturday night. Vettori didn’t fade when Hermansson survived his first-round blitz, and he stayed strong in the championship frames to earn his fourth straight victory within the Las Vegas-based promotion. Thanks to his handiwork, Vettori makes his debut in Sherdog.com’s middleweight rankings at No. 6. With a post-fight callout of Paulo Costa and a budding feud with reigning champ Israel Adesanya, the future could be very interesting indeed for “The Italian Dream.”

In a major housekeeping note, seven fighters have either reached or surpassed their 18-month inactivity limit. They are as follows: Rafael Lovato Jr. (middleweight), Patricio Freire (lightweight), Jose Aldo (featherweight), Renato Carneiro (featherweight), Tatiana Suarez (strawweight), Nina Ansaroff (strawweight) and Viviane Pereira (atomweight). Be sure to check out the latest divisional polls to see who’s moving up and moving in as a result of those departures.