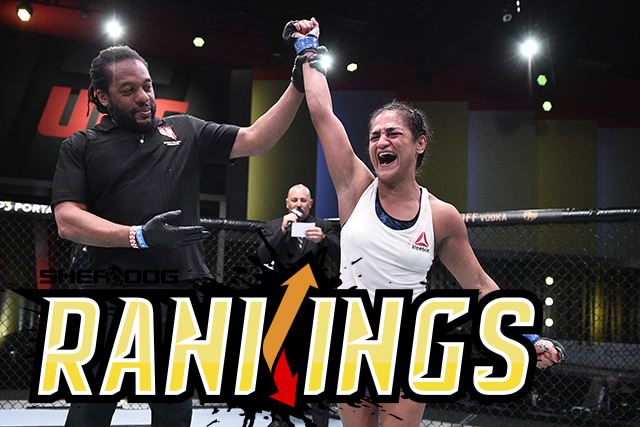 A fringe contender in the Ultimate Fighting Championship’s deep strawweight division, Cynthia Calvillo needed just one victory to put herself right in the title mix at 125 pounds.

Calvillo survived a rocky opening round to impose her will against Jessica Eye and win a clear-cut unanimous decision in the UFC on ESPN 10 main event at the UFC Apex in Las Vegas on Saturday night. An impressive performance against a recent title challenger gives Calvillo instant credibility in a division starved for depth. It also gives her a number by her name at 125 pounds, as she checks in at No. 5 in our latest flyweight poll. The Tiger Muay Thai representative remains ranked ninth at 115 pounds, but whether she returns to that weight class remains to be seen.

Elsewhere, Julia Avila won her second straight in UFC competition – and fourth in a row overall – by dispatching Gina Mazany in 22 seconds in a preliminary affair. As a result, “Raging Panda” enters the women’s bantamweight bubble at No. 15.