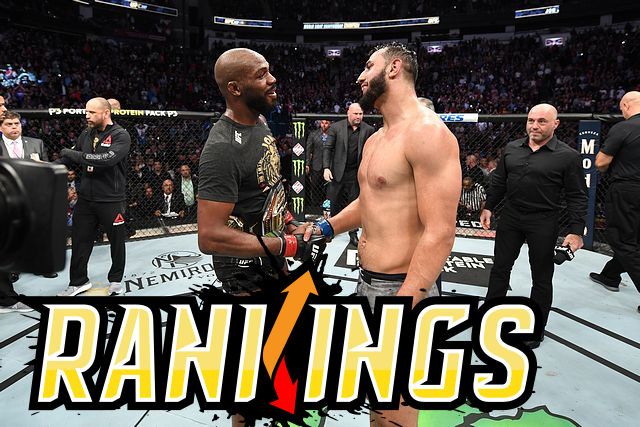 The ordering process for Ultimate Fighting Championship pay-per-views has changed: UFC 247 is only available on ESPN+ in the U.S.

There were a number of viewpoints on how the UFC 247 headliner should have been scored — including many that saw a 48-47 verdict for Reyes – but the only ones that truly mattered awarded the victory to the reigning light heavyweight champion. As a result, Jones maintains his grip on the top spot at 205 pounds and Reyes, despite raising his stock significantly, doesn’t rise above his previous sixth ranking.

There was no such controversy in the UFC 247 co-main event, as top-ranked Valentina Shevchenko further distanced herself from the rest of the flyweight division with a third-round stoppage of an overmatched No. 6 Katlyn Chookagian. Elsewhere in the division, the previously 10th-ranked Andrea Lee lost a competitive decision to Lauren Murphy on the UFC 247 undercard, clearing the way for Molly McCann to make her Top 10 debut. Murphy assumes the No. 11 position on the bubble, with “KGB” just behind her.

Also on the card, Derrick Lewis stays put at No. 6 in the heavyweight rankings after a forgettable decision win over converted light heavyweight Ilir Latifi. Finally, Jinh Yu Frey lost her atomweight crown due to missing weight but keeps her No. 3 ranking after besting No. 7 Ashley Cummins in a rematch at Invicta FC 39. Frey is considering a move to 115 pounds after her issues on the scale, so her time could be limited in the atomweight poll.