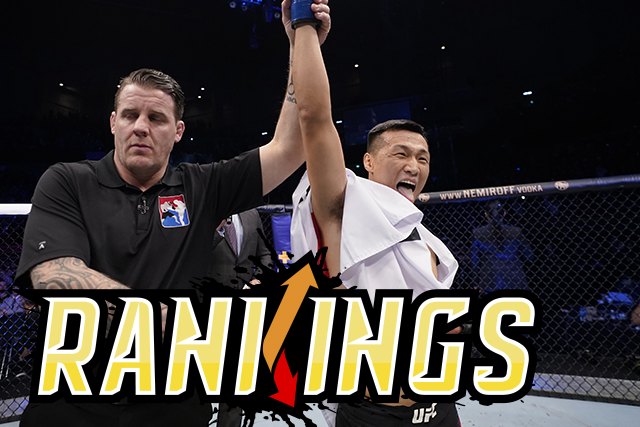 Chan Sung Jung might very well be one of the most exciting fighters in recent memory. He’s also a serious title contender for the second time in his Ultimate Fighting Championship tenure.

“The Korean Zombie” walked through Frankie Edgar in the UFC Fight Night 165 headliner in Busan, South Korea, on Saturday, capping off a dominating effort with a technical knockout victory at the 3:18 mark of the opening frame. Were it not for a Hail Mary KO loss to Yair Rodriguez in November 2018, Jung would be on a four-fight winning streak dating back to a fourth-round stoppage loss in a title bout against Jose Aldo in August 2013. As it stands, the 32-year-old South Korean has won three of his last four — all by first round KO — and moves to No. 7 in our latest featherweight poll.

Edgar, meanwhile, was supposed to be make his first bantamweight foray next month, but that appears unlikely after the beating he absorbed against Jung. The previously No. 5-ranked featherweight plummets to 10th in defeat.

Meanwhile, Ilima-Lei Macfarlane continued her stranglehold on the flyweight crown with a dominant five-round verdict over Kate Jackson in the Bellator 236 main event. That makes four successful title defenses for the charismatic Hawaiian, and she solidifies her No. 2 ranking in our women’s 125-pound rankings as a result.

Elsewhere, Volkan Oezdemir continued his resurgence at light heavyweight, taking a closely-contested split verdict over Aleksandar Rakic in the UFC Fight Night 165 co-main event. Oezdemir has followed a three-bout skid with a two-fight winning streak and maintains his eighth ranking. Rakic doesn’t fall from the ninth spot for narrowly losing a bout many observers thought he might have deserved to win. Also at UFC Fight Night 165, No. 7 flyweight Alexandre Pantoja made a statement with a first-round KO of No. 8 Matt Schnell, giving him four wins in his last five Octagon outings. Pantoja stays in his current spot, while Schnell falls below Rogerio Bontorin to ninth. Finally, we’d like to welcome the undefeated A.J. McKee, who blew past Derek Campos in the quarterfinals of the Bellator featherweight grand prix, to the 145-pound bubble.

Weekly housekeeping update: Both Chad Mendes and Cat Zingano reached their year of inactivity this past week and have been removed from the men’s featherweight and women’s bantamweight rankings, respectively. While Mendes is retired, Zingano could resurface in the female featherweight poll in the coming months if she makes a successful run in Bellator MMA.