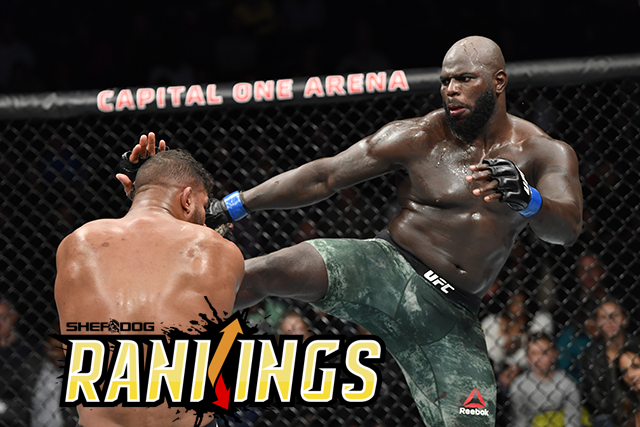 Jairzinho Rozenstruik has the type of power that can change the course of a fight in a matter of seconds.

The Surinamese heavyweight waited until the waning moments of the fight to unleash his wrath on Alistair Overeem in the UFC on ESPN 7 headliner, winning via knockout 4:56 into the fifth frame at Capital One Arena in Washington, D.C., on Saturday night.“Bigi Boy’s” fourth straight KO/TKO victory in UFC competition propels him into the Sherdog.com heavyweight Top 10 at No. 8. Overeem, who had a modest two-bout winning streak snapped, falls one spot to ninth.

Elsewhere, Cynthia Calvillo and Marina Rodriguez battled to a draw in the strawweight co-main event at UFC on ESPN 7. While Calvillo stands pat in the No. 9 position at strawweight, Rodriguez climbs a couple spots from No. 13 to No. 11 after hanging tough with an opponent who missed weight by a significant margin. Finally, fourth-ranked women’s bantamweight Aspen Ladd moved past the disappointment of a quick knockout loss to Germaine de Randamie this past summer by stopping No. 7 Yana Kunitskaya in D.C. Ladd doesn’t yet make an upward move by virtue of the victory, but she is nipping at the heels of Holly Holm, whose last viable 135-pound triumph came against Bethe Correia in June 2017.


Listen to "Beatdown After The Bell: UFC on ESPN 7" on Spreaker.