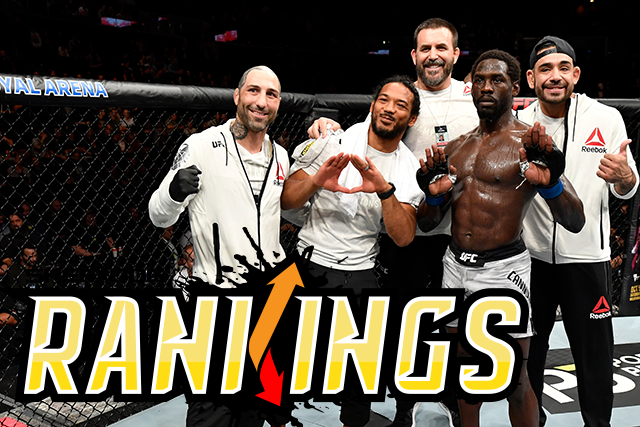 Jared Cannonier has turned around his career since moving to 185 pounds.

“The Killa Gorilla” began his Ultimate Fighting Championship tenure with losses in four of his first seven appearances while competing at both heavyweight and light heavyweight. Things have changed drastically since the MMA Lab product dropped to middleweight, and his performance at UFC Fight Night 160 in Copenhagen, Denmark was just the latest example. Cannonier survived an early push from Jack Hermansson to earn his third consecutive finish, stopping his adversary with ground-and-pound 27 seconds into Round 2. Thanks to successive stoppages of Hermansson, Anderson Silva and David Branch, the Anchorage, Alaska, native climbs from the bubble to No. 6 at 185 pounds. Hermansson, who entered the contest on the momentum of a signature triumph over Ronaldo Souza, sees a four-bout winning streak snapped and falls from sixth to seventh.

Elsewhere, Gegard Mousasi edged Lyoto Machida by split decision in the Bellator 228 headliner. It was far from an enthralling contest, but it did allow the Armenian-born Dutchman to avenge a loss to “The Dragon” that occurred more than five years ago in the UFC. Mousasi has won nine of his last 10 bouts and has his sights set on a rematch with Bellator middleweight champion Rafael Lovato Jr. As a result of Cannonier’s entry into the 185-pound Top 10, “The Dreamcatcher” drops one spot from ninth to 10th.

One housekeeping note: Due to inactivity, Ketlen Vieira (No. 4 at bantamweight) and Aga Niedzwiedz (No. 6 at flyweight) have been removed from our rankings, allowing entry for Marion Reneau and Andrea Lee, respectively.