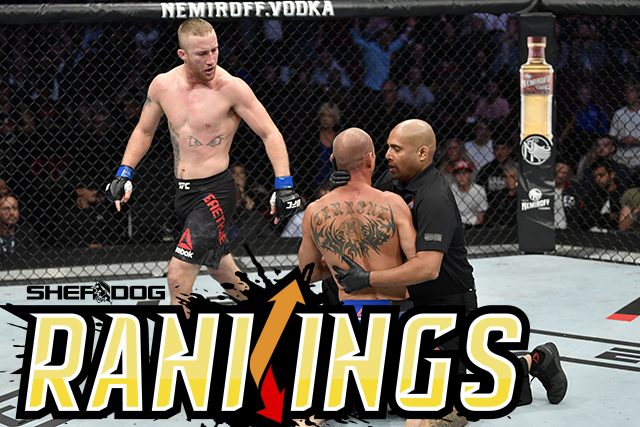 Justin Gaethje isn’t just a brawler anymore, but he continues to make short work of opponents inside the Octagon.

Gaethje extended his first-round finishing streak to three on Saturday, as he stopped Donald Cerrone with punches 4:18 into the opening stanza of the UFC Fight Night 158 headliner at Rogers Arena in Vancouver, British Columbia, Canada. After dropping back-to-back fights against Dustin Poirier and Eddie Alvarez, “The Highlight” has rebounded to make short work of Cerrone, Edson Barboza and James Vick in his last three appearances to put himself in the thick of the 155-pound title discussion. By virtue of his latest victory, Gaethje jumps from seventh to fourth in our divisional rankings. Cerrone, meanwhile, is on a two-fight losing streak and falls to fifth.

Elsewhere, former light heavyweight title challenger Glover Teixeira continues to show he has something left in the tank at 39 years old, and his split-decision triumph over Nikita Krylov brings him back to the bubble list at 205 pounds, while “The Miner” makes an exit from said list in defeat. Finally, “The Ultimate Fighter 17” finalist Uriah Hall earned his second consecutive victory with a split verdict over Antonio Carlos Jr., and thus returns to the middleweight bubble.