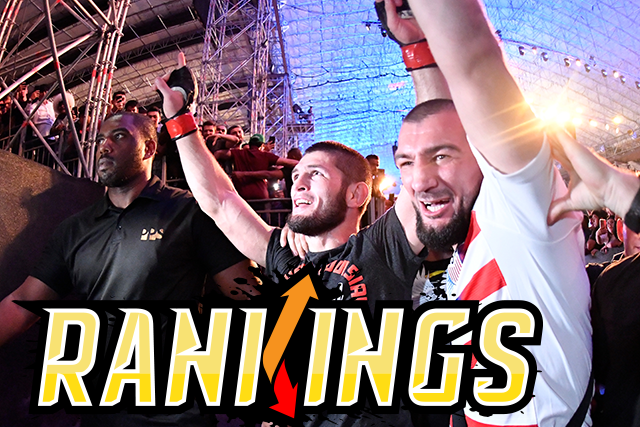 From the moment Khabib Nurmagomedov landed his first takedown in the UFC 242 headliner, a familiar sense of inevitability began to take hold.

Relying on his usual dose of relentless pressure and control, “The Eagle” was able to wear down interim lightweight champion Dustin Poirier with relative ease, eventually setting up a rear-naked choke finish 2:06 into the third round. That makes 12 consecutive UFC triumphs and a 28-0 overall mark for Nurmagomedov. He’s the clear-cut No. 1 lightweight in the world following two dominant title defenses, and a tantalizing showdown with Tony Ferguson still looms.

Elsewhere, Ryan Bader appeared to be well on his way to a successful heavyweight title defense against Cheick Kongo in the Bellator 226 main event before an inadvertent eye poke brought a premature en to the contest at the 3:52 mark of Round 1. While that result affects neither Bader nor Kongo’s heavyweight ranking status, we are removing “Darth” from the light heavyweight rankings on account of him not defending the 205-pound belt since November 2017. Surging contender Aleksandar Rakic joins the 205-pound poll at No. 10.

Nurmagomedov wasn’t the only competitor at UFC 242 to ride a dominant wrestling effort to victory. Heavyweight Curtis Blaydes absolutely battered Shamil Abdurakhimov with ground-and-pound en route to a technical knockout victory 2:22 into the second stanza. Outside of a pair of knockout losses to Francis Ngannou, “Razor” Blaydes has been impressive during his promotional tenure. As a result, he moves up to the fifth spot in the big-man rankings. Finally, Joanne Calderwood maintained her No. 9 ranking in a UFC 242 preliminary bout, as she edged 10th-ranked Andrea Lee via split decision.