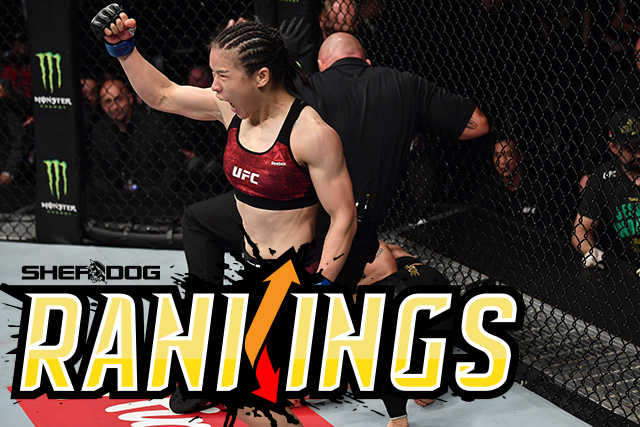 It only took 20 wins in a row to get there, but Weili Zhang now sits atop the strawweight division.

Zhang become the first Chinese Ultimate Fighting Championship ace in emphatic fashion at UFC Fight Night 157, as she upset Jessica Andrade with a furious salvo of punches, knees and elbows to earn a stoppage just 42 seconds into their headlining contest in Shenzhen, China this past Saturday. As a result, Zhang vaults from seventh to first at 115 pounds and looks poised to be a key component of the UFC’s future. Andrade, meanwhile, sees a four-bout winning streak snapped and falls to second in our latest strawweight rankings.

Elsewhere, Jingliang Li enters the welterweight bubble after halting Elizeu Zaleski dos Santos’ seven-fight winning streak with a late third-round TKO in the UFC Shenzhen co-feature. “The Leech” seven of his last eight promotional appearances dating back to July 2016. Finally, surging flyweight Kai Kara-France won his third straight in the Octagon — and eighth in a row overall — by outpointing Mark De La Rosa to establish himself as a person of interest in a suddenly revived division. Kara-France maintains his position on our 125-pound bubble, but more significant challenges could await.