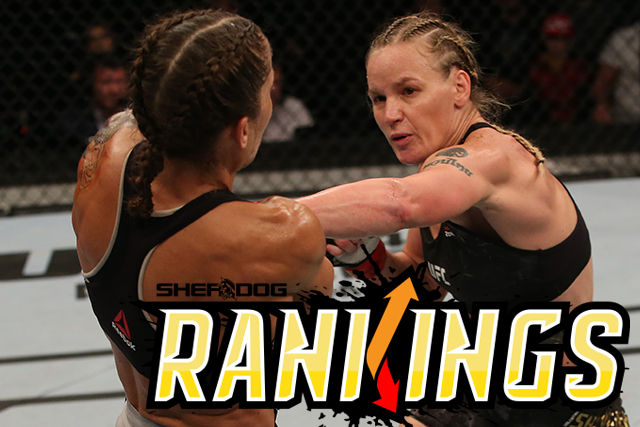 Nothing to see here -- just another dominant Valentina Shevchenko victory in the women’s flyweight division.

Shevchenko completely throttled Liz Carmouche for five rounds in the UFC Uruguay headliner, sweeping the judges scorecards for a suspenseless unanimous decision triumph. “Bullet” avenged a prior defeat to Carmouche on the regional circuit nearly a decade ago and in doing so, maintained a stranglehold on the top of the 125-pound weight class. At the moment, Shevchenko appears to be the most untouchable champion in the UFC, and her most interesting challenge could be a third meeting with featherweight and bantamweight queen Amanda Nunes down the road. It appears for now that Shevchenko is content to reign atop the flyweights, however, and a matchup with Katlyn Chookagian could be next on the agenda.

Elsewhere, Volkan Oezdemir kept his spot in the light heavyweight Top 10, ending a three-bout skid with a second-round knockout of Ilir Latifi at UFC Uruguay. Once on the verge of tumbling out of the rankings, “No Time” instead holds on to the No. 10 spot. Meanwhile, Pam Sorenson joins the rankings at women’s featherweight on the strength of a dominant decision win against Kaitlin Young in a title bout at Invicta FC 36.