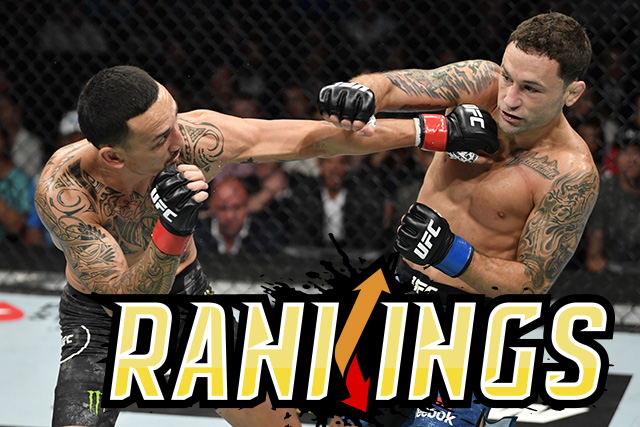 It was back to business as usual for Max Holloway at featherweight.

“Blessed” returned to the win column at UFC 240, as he outstruck Frankie Edgar for the majority of their five-round contest to earn a convincing unanimous decision win in the evening’s headliner at Rogers Place in Edmonton, Alberta Canada. The Hawaiian only further solidified his status as our No. 1 ranked featherweight, while Edgar also stays put at fifth following another typically gritty effort.

Meanwhile, Cristiane Justino also returned to form at UFC 240, as she dominated Felicia Spencer for three rounds in the evening’s co-main event. While “Cyborg” couldn’t earn one of her trademark knockout victories, she nonetheless imposed her will on a durable foe. If Justino stays in the UFC, perhaps a rematch with Amanda Nunes could be in the offing. However, the Brazilian has numerous issues with the promotion, and a parting of ways is a very real possibility. Regardless, Justino remains the clear-cut No. 2 female featherweight in the world.

Elsewhere, No. 6 flyweight Deiveson Figueiredo swept the scorecards against ninth-ranked Alexandre Pantoja but doesn’t gain any ground in our 125-pound poll. The same goes for second-ranked atomweight Seo Hee Ham, who dispatched bubble lister Tomo Maesawa with first-round knees at Rizin 17 in Japan.