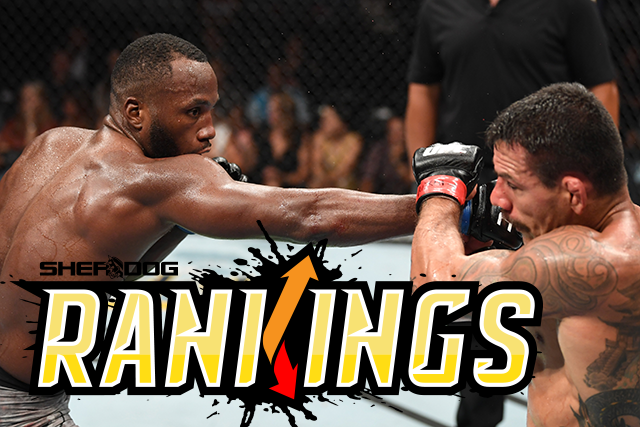 Welterweight has one of the deepest talent pools in all of mixed martial arts, so it only stands to reason that it takes a little extra to crack the divisional rankings.

Leon Edwards is a prime example of said depth, as he finally enters our 170-pound poll after a five-round verdict over Rafael dos Anjos in the UFC on ESPN 4 headliner this past Saturday. A seven-bout winning streak had “Rocky” hovering on the welterweight bubble. His eighth – and most significant – triumph allows him to join the rankings at No. 5, taking the place of dos Anjos, who drops one spot to sixth.

By contrast, heavyweight requires only a small winning streak to gain notice. However, Walt Harris’ modest four-bout unbeaten streak isn’t quite enough for him to make the Top 10. However, his 12-second shellacking of Alexey Oleynik at UFC San Antonio clears the way for grizzled veteran Cheick Kongo to claim the 10th spot. Harris joins the bubble and sends Oleynik tumbling out of the heavyweight Top 15 altogether.

Elsewhere at UFC on ESPN 4, No. 7-ranked women’s bantamweight Raquel Pennington halted a two-fight skid with a decision against bubble lister Irene Aldana, while No. 5 flyweight Jennifer Maia bested bubble occupant Roxanne Modafferi for a second time. Neither performance was enough to break the status quo in those divisions.