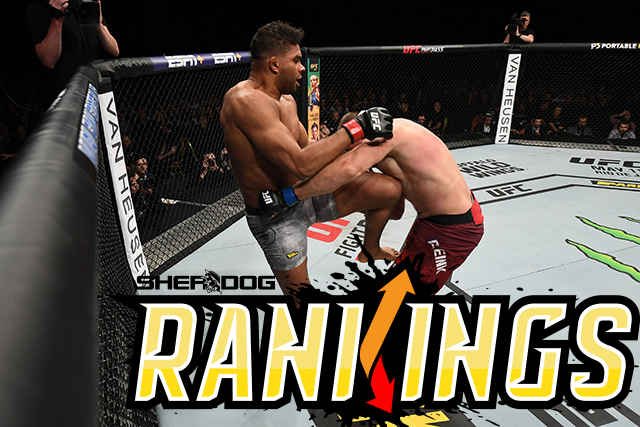 You can sign up for a free seven-day trial of ESPN+ right here, and you can then stream UFC on ESPN+ live on your computer, phone, tablet or streaming device via the ESPN app.

While not the force he once was, Alistair Overeem is still quite dangerous.

About one month shy of his 39th birthday, “The Reem” went into hostile territory at UFC St. Petersburg, survived an early onslaught from Russian foe Alexey Oleynik and earned his second consecutive Octagon triumph on the strength of a well-placed knee followed by powerful ground-and-pound at the 4:45 mark of the opening stanza. Overeem believes a three-fight winning streak would merit a heavyweight title shot, and considering the state of the division, he might not be wrong. For now, he stands pat at No. 8 in our latest heavyweight poll.

Elsewhere, Kyoji Horiguchi continued his brilliant run in Rizin Fighting Federation, scoring a first-round stoppage of fellow UFC veteran Ben Nguyen at Rizin 15 in Yokohama, Japan. That makes 12 straight victories for Horiguchi — including nine in Rizin — and potentially sets up a rematch with Darrion Caldwell at Madison Square Garden at Bellator 222 in June. While inactivity at 125 pounds results in Horiguchi’s removal from the flyweight rankings, his recent string of excellence vaults him past John Lineker into the fifth spot at bantamweight.

Meanwhile, beloved women’s pioneer Roxanne Modafferi earns the 10th spot at flyweight following a mild upset victory over Antonina Shevchenko. “The Happy Warrior” replaces Rin Nakai, who has been out of action since February 2018.