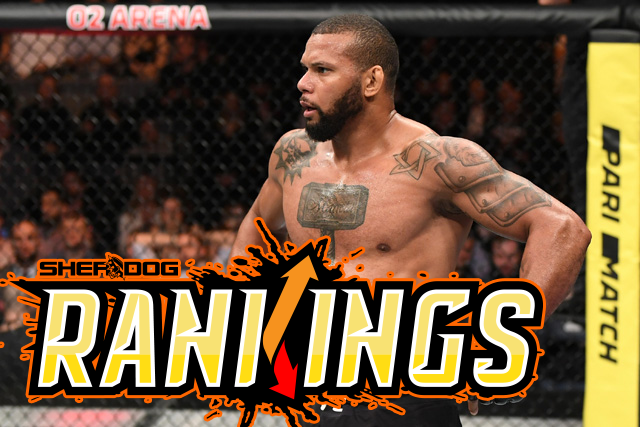 As Volkan Oezdemir and Anthony Smith have already proven, the path to light heavyweight title contention can be much shorter than in other divisions. Now, it appears that Thiago Santos could be following in their footsteps.

“Marreta” earned his third consecutive 205-pound victory at UFC Prague, showcasing his power with a third-round technical knockout of Jan Blachowicz in the evening’s headliner at the O2 arena. Three was the magic number for both Oezdemir and Smith to earn light heavyweight title shots, so Santos could very well be next in line to face the winner of the fight between Jon Jones and “Lionheart” at UFC 235 on Saturday. For now, the Brazilian will have to settle for a move up our rankings, as he ascends from No. 9 to No. 6 in our latest poll. Blachowicz, upon seeing his four-fight winning streak come to an end, falls to ninth.

Elsewhere, highly-regarded Russian bantamweight prospect Petr Yan earned the most significant victory of his career to date with a unanimous verdict over former flyweight title challenger John Dodson on the UFC Prague main card. Thanks to his fourth straight Octagon triumph, “No Mercy” enters the bantamweight rankings for the first time at No. 10, sending Dodson to the bubble in the process.

Finally, Liz Carmouche maintained her hold on the fourth spot at women’s flyweight with a hard-fought decision over Lucie Pudilova in Prague, while featherweight Olga Rubin remained unbeaten and ranked with a decision against Iony Razafiarison at Bellator 217.