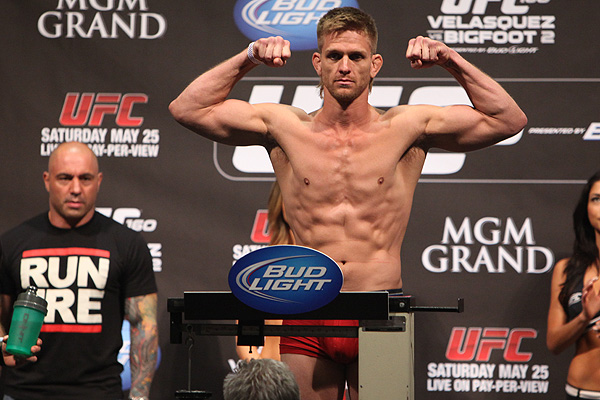 The 37-year-old veteran’s most recent victory came May 25 at UFC 160, when he edged Rick Story on a split decision.

“I wasn’t 100-percent confident, but in my heart I felt like I did enough,” Pyle said of the decision during an interview with the Sherdog Radio Network’s “Beatdown” show. “I felt like I showed a lot more technique and everything. I wasn’t sure, but when I got my hand raised, I felt like it was deserved. I did. I honestly felt like I did enough. I’m glad that the judges are becoming a little bit more educated nowadays and seen that I was the busier man on the ground and I really took away his ground-and-pound game and threatened him several times from off my back.”

The win was Pyle’s fourth straight and seventh in his last eight UFC bouts. However, he’s not yet achieved the level of recognition he’d like to have in the Octagon.

“What do I have to do?” Pyle asked. “Do I have to do a circus act in the postfight interview? Do I have to [ride] around on a little tricycle and juggle? What the hell do I have to do? It’s fine. Because a lot of people are asking me, ‘Well, don’t you think this should get you a bit more recognition?’ … Well, obviously everyone else seems to think so other than the UFC. Now after this fight, something very well could be cooking. Not 100-percent sure. I don’t want to put my foot in my mouth and say that the UFC don’t care about me. I know they do. It’s just where’s their mind for marketing me? I don’t know. I have no idea what they want to do with me, so we’ll see. Hopefully this fight will open some eyes.”

Pyle’s bout with Story went the distance, but before that one he had finished three straight in the first round. The streak began after an embarrassing loss to Rory MacDonald in August 2011, which served to refocus Pyle. Now he’s hoping the UFC will credit his run with a push.

“Obviously the UFC’s doing something right,” Pyle said. “Their strategies and plans for guys seem to be different for each guy, so we’ll just see what they want to do, what their thoughts are pretty soon. I’m just staying positive and staying in the gym and trying to remain a winner. That’s all I can do.”

Listen to the full interview (beginning at 59:40).