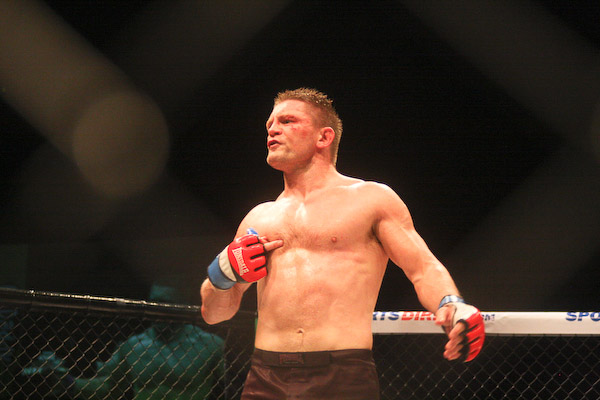 British Association of Mixed Martial Arts middleweight champion Tom Watson has signed with the UFC and will make his promotional debut on home soil against “Ultimate Fighter” Season 11 alumnus Brad Tavares at UFC on Fuel TV 5.

Promotion officials additionally confirmed Thursday that British welterweights John Maguire and John Hathaway will square off at the Sept. 29 event, as will light heavyweights Fabio Maldonado and Jorgen Kruth. The show takes place at the Capital FM Arena in Nottingham, England, and is headlined by a heavyweight confrontation pitting Dutchman Stefan Struve against American prospect Stipe Miocic. The evening's main draw will be broadcast on Fuel TV, while the prelims are expected to stream live on Facebook.

Watson has won 11 of his last 12 fights, capturing the BAMMA world title in 2010 by outpointing ex-IFL champion Matt Horwich. “Kong” has defended his belt three times, besting countryman Alex Reid before stopping Pride veteran Murilo Rua in his lone appearance of 2011. Watson kicked off this year with another successful defense, knocking out BAMMA British welterweight champion Jack Marshman on March 24.

Meanwhile, Tavares, 24, enters the cage following a unanimous decision victory over Dongi Yang at UFC on Fuel TV 3 in May. The Hawaiian suffered the lone setback of his pro career in his previous outing, dropping a unanimous verdict to Aaron Simpson last summer at UFC 132. Tavares owns six of his eight career wins via knockout or submission and has racked up a 3-1 Octagon record to date.

Known for his ground game, Maguire used his submission skills to snatch “Submission of the Night” in last fight, finishing DaMarques Johnson with an armbar at UFC on Fuel TV 2. Prior to that April victory, “The One” made a successful UFC debut this past November, outpointing “TUF 13” contestant Justin Edwards at UFC 138.

Just once beaten as a pro, Hathaway, 25, steps into the Octagon four years younger than his opponent. Following four consecutive wins to start his UFC career, the London Shootfighters product saw his momentum derailed by veteran Mike Pyle at UFC 120. However, the Brit rebounded with a pair of victories, outpointing Kris McCray in May 2011 and Pascal Krauss nearly one year later in his return from injury at UFC on Fox 3.

Maldonado has seen his considerable efforts fall on deaf ears in his last two outings, as the Brazilian was outpointed by Kyle Kingsbury and Igor Pokrajac in a pair of hard-fought unanimous decision defeats. Still searching for his second UFC victory, Maldonado was victorious in his Octagon debut 21 months ago at UFC 120, knocking out James McSweeney in the third round. The 32-year old owns 12 of his 18 career wins by form of knockout and has been stopped only twice -- both times via submission -- in his nearly 12 years as a pro.

Kruth, meanwhile, was expected to make his UFC debut in April against fellow muay Thai practitioner Cyrille Diabate but was forced out of that UFC on Fuel TV 2 pairing with an injury. The experienced kickboxer began his transition to mixed martial arts in 2009, rattling off five consecutive victories and most recently stopping Yusuke Kawaguchi via technical knockout this past November. The Swede has finished each of his first five foes inside the first round, ending three of their nights in less than one minute.