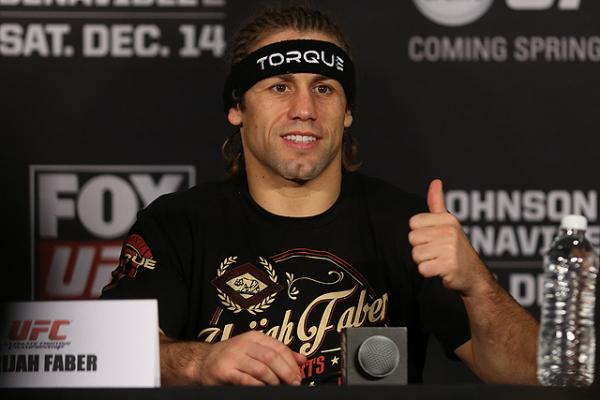 Urijah Faber capped off a terrific year Saturday when he submitted Michael McDonald at UFC on Fox 9.

Coming off the win, Faber’s fourth in 2013, he joined the Sherdog Radio Network’s “Beatdown” show to discuss his opponent, his future and more.

On McDonald’s future and a potential rivalry with Team Alpha Male: “I think I had a great game plan going in there and I was able to utilize all my strengths and kind of take away his strengths. He’s still a very tough guy. The bad news for him and his camp is we have Chris Holdsworth, who just won ‘The Ultimate Fighter’ and he gives me fits every single day in the gym, and T.J. Dillashaw -- it’s a coin toss with he and I every day in the gym and he’s making huge improvements every day. That rivalry with [McDonald’s] team out there, it doesn’t stop with me unfortunately. It’s going to be years in the making. He’s got a really bright future. He’s got a really great attitude, [but] he’s going to have his hands full with all the Alpha Male guys for the next 10 to 15 years unfortunately.”

On whether it upset him when McDonald said he was at the tail end of his career: “No. I mean, it’s true. He’s the young gun and I’m getting towards the tail end of my career. That’s 100-percent true. He’s a very intelligent guy. I saw him kind of go through a lot of the philosophy of the fight game and I like what he was saying. It made a lot of sense to me. The guy’s a thinker. There’s no doubt he’s at the very beginning and I’m getting closer towards the end, but how long is the end? It could be a 10-year career or an 11-year career. The end could be another three, four, five years really.”

On whether he’s the best fighter he’s ever been: “One hundred percent. I mean, I have to be the best fighter that I have been, unless my confidence is broken. That’s usually what you see go, or somebody’s body goes, but my parents started me out as a guy with all the advantages, living a super healthy lifestyle from an early age, and then on top of that, I’ve taken it into my own hands. I live a healthy lifestyle and I’ve been really fortunate. I feel 100 percent. Now the skill has been building and building and building because I continue to learn and I’ve been open-minded. That’s what I’m going to continue to do up until I’m finished competing.”

On whether he could fight into his 40s: “I know 150 percent that I could be fighting competitively into my 40s, but I do not want to be. That’s for sure.”