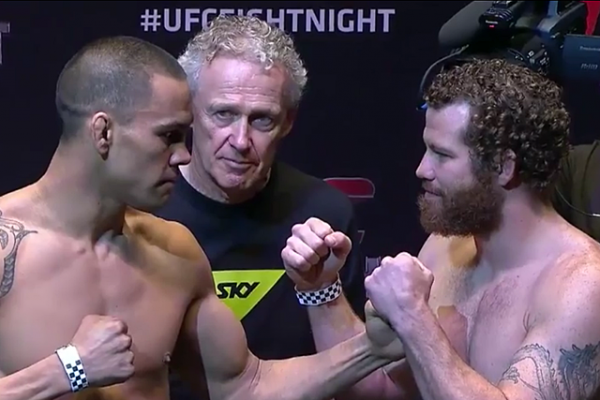 James Te Huna has planned a rude welcome for Nate Marquardt. Whether he can execute it or not remains to be seen.

Marquardt checked in at 186 pounds for his return to the Ultimate Fighting Championship’s middleweight division against Te Huna (186) in the UFC Fight Night “Te Huna vs. Marquardt” main event on Saturday at the Vector Arena in Auckland, New Zealand. Heavyweight co-headliners Soa Palelei (264) and Jared Rosholt (259) also met their contracted weight requirements without issue at Friday’s official weigh-in.

Te Huna will enter the cage on a two-fight losing streak. The 32-year-old last appeared at UFC Fight Night “Hunt vs. Bigfoot” in December, when he was knocked out just 63 seconds into his battle with former light heavyweight champion Mauricio Rua at the Brisbane Entertainment Centre in Brisbane, Australia. Te Huna has compiled a 5-3 record since arriving in the UFC in February 2010, having beaten Igor Pokrajac, Ricardo Romero, Aaron Rosa, Joey Beltran and Ryan Jimmo. A potent and aggressive striker with thunder in his hands, he has secured 10 of his 16 career victories by knockout or technical knockout.

A former middleweight King of Pancrase and Strikeforce titleholder, Marquardt has lost three in a row, the last two by brutal first-round knockout. The 35-year-old Brazilian jiu-jitsu black belt has not competed since UFC 166 in October, when he was victimized by onetime Bellator MMA champion Hector Lombard at the Toyota Center in Houston. Wins over Tyron Woodley, Rousimar Palhares, Demian Maia and Martin Kampmann anchor the Marquardt resume, which includes a 10-6 mark in the UFC.