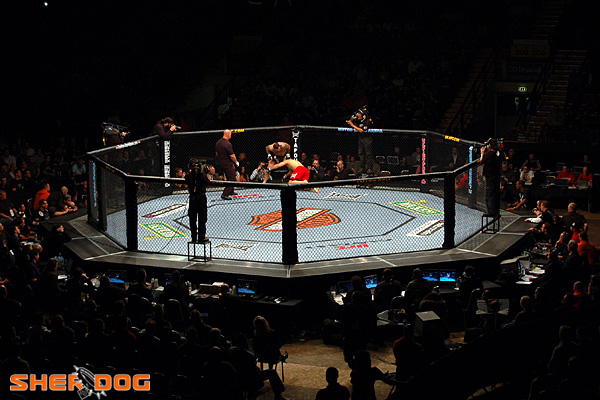 Aaron Riley has been through his share of wars.

He’s seen a few too, and recently the 15-year veteran of the sport joined the Sherdog Radio Network’s “Rewind” show to give the Pro Perspective on UFC 160.

On why dos Santos circled toward Hunt’s power hand at one point: “You always have to be aware, but it’s something you can work around because you don’t want to become predictable in your standup fighting. You don’t want to be predictable with your rhythm. You don’t want to be predictable with your movement because again, if you become too predictable in any of those aspects, it gives the other guy a chance to land. Maybe Mark’s trying to set up something combination-wise on one side and then Junior in that round, he’s like, ‘OK, I’m going to change it up and go this other direction a little bit,’ and it throws him off, and by the time he catches on to that, you can change it up again.”

On dos Santos’ spinning kick that caught Hunt: “There are times when you just feel the opening for the technique. There’s no way that I can describe it to you. … There are times when you’re in there and you’re just like, ‘This is the technique to use now.’ It’s almost like you don’t even consciously think of it. You just -- bang -- mind and body working together. You respond and it happens. It’s awesome when it happens like that.”

On the spinning kicks we’ve seen recently in the UFC: “It seems to me that people will sometimes pick up new techniques, and they just start to play with them and they just have a real connection with it. They just take the technique and make it their own. … I think it’s just been kind of a lightning-striking-twice-type thing with these spin-kick knockouts in two UFCs back to back. I think it’s just a rare thing that it’s happened that way.”

On whether the spinning kicks are a fad that will pass: “That’s what I think’s going to happen with this spin kick. I just think it was lightning striking twice, and that’s it.”

On deciding to jump to a guillotine like Glover Teixeira did against James Te Huna: “Any submission where you end up putting yourself on your back, you just have to be very prudent in making those decisions … because the guy may wake up. He may slide out and then there you are, stuck on your back, maybe getting a Jon Jones-style elbow coming at your face. Nobody wants that. You really have to weigh it before you make that move, but then again, if you just feel it and you know it’s there, you just have to hit it. Obviously it worked in the Teixeira fight. Sometimes you just have that chance to finish and you don’t want to pass that up either. The submission you pass up may be the one that nets you Submission of the Night.”

Listen to the full interview (beginning at 1:23).