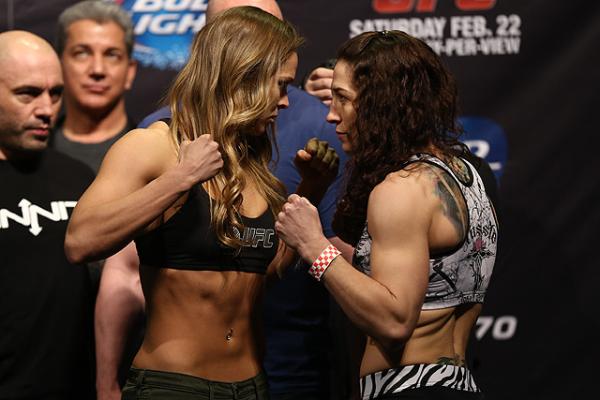 In an interview with the Sherdog Radio Network’s “Beatdown” show, Miletich discussed Rousey’s win, her persona and more.

On the stoppage: “I actually watched the replay over and over and over. Because my initial thought was wow, that was a really fast stoppage. I had a couple debates with people on Twitter [who were] saying no, the referee has to look out for their safety, this and that. One, it wasn’t an amateur fight; it was a world title fight. You’ve got to let things play out more. Two, it’s not like [McMann] took a shinbone across the head or a straight right to the jaw and got dropped and was unconscious. She was conscious. Yes, she had the wind knocked out of her. She took a couple of punches that really weren’t all that damaging and was on her way back up.

“Quite frankly, when I watched the replay over and over again, Herb was sprinting in to stop that the minute she was going down. His intention was, flat out, to stop it. You could tell it was done. I don’t know if he was doing that to make up for letting the fight earlier in the night go way too long -- I have no idea what was on his mind. I have a lot of respect for Herb. He does a great job refereeing 99 percent of the time, but it was definitely an early stoppage.”

On McMann’s performance and Rousey’s game plan: “[McMann’s] boxing looked good. She was throwing good crisp punches, was connecting. Obviously, physically, besides pushing her against the cage, Ronda wasn’t having her way with her by any means, but I think it’s important to point out the coaching. Ronda Rousey’s coaches paid close attention and knew that Sara liked that underhook on the right side and exposed that right side forward and leaned over a lot and ate those knees. You could tell that Rousey was hunting that liver the whole time. I would say the coaching staff of Rousey gets a big high five because they were definitely paying attention. It was a brilliant job of coaching.”

On Rousey as the poster girl for women’s MMA: “Hindsight’s 20-20. I understand that, but you generally want your champions -- especially someone who’s on the forefront of a wave of women’s MMA -- you would prefer that that person be extremely well liked by all the fans, to be the golden girl that everybody gets behind. And she has a huge fan base. I’ve talked to Ronda several times when she was fighting in Strikeforce. She’s a very friendly girl, very witty, a very nice person, but her public persona, in-the-cage persona and attitude is that of wearing a black hat. I wouldn’t necessarily want my first woman’s champion to play the villain.”

On who’s responsible for Rousey’s portrayal: “I think it comes down to having a talk with an athlete, saying, ‘Listen, you can be a huge star. This is the way you probably want to project yourself to the fans. This is merely a suggestion. We’re not making you do it, but in the end it’s probably going to make you a lot more money, sell you a lot more shirts and make us more money and give us more pay-per-views if everybody or at least 95 percent of the fans out there love you.’ But there’s certainly going to be people tuning in to watch her get beat now too.”