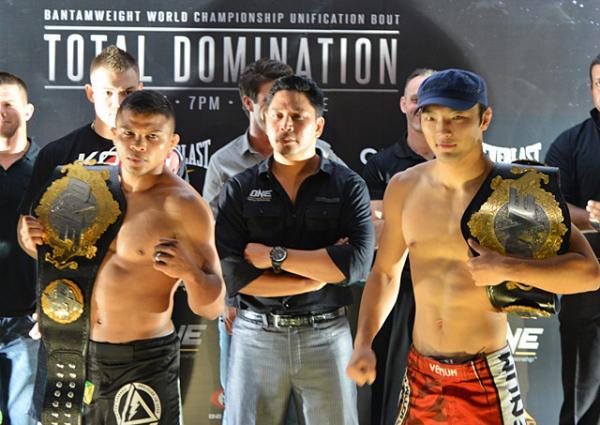 One Fighting Championship has room for only one bantamweight boss.

Kim will carry a three-fight winning streak into the match. The 21-year-old South Korean last fought at One FC 6 “Rise of Kings” in October 2012, when he stopped Leandro Issa on second-round punches to become the first bantamweight champion in One Fighting Championship history. Kim has compiled a 2-2 mark under the One FC banner.

A former two-division Dream titleholder and AMC Pankration representative, Fernandes has won 13 of his last 14 fights. The 33-year-old Brazilian last competed at One FC 9 “Rise to Power” in May, when he captured the interim bantamweight crown with a unanimous decision over Koetsu Okazaki. A three-time Brazilian jiu-jitsu world champion, Fernandes holds a perfect 2-0 mark in One FC.

While the Kim-Fernandes showdown will serve as the centerpiece, plenty of eyes will be on Aoki and his debut at 145 pounds.

Aoki has recorded 13 wins in his past 15 outings, losing only to Eddie Alvarez and Gilbert Melendez. The 30-year-old former Dream and Shooto champion last appeared at One FC 8 “Kings and Champions” in April, when he submitted Kotetsu Boku with a second-round rear-naked choke to win the One Fighting Championship lightweight title. A deft and dangerous grappler, Aoki has secured 22 of his 33 career victories by submission.

Stevens has spent much of his career traversing the regional MMA circuit in America. The 31-year-old Ohioan last competed at a Revelation Fight Organization show in August, when he earned a unanimous decision over “The Ultimate Fighter” Season 14 alum Dustin Neace at the Richland County Fairgrounds in Mansfield, Ohio. Stevens has been finished only once in 17 professional appearances; he has never been submitted.

Sherdog.com will provide a live stream of the undercard at 7 a.m. ET/4 a.m. PT.