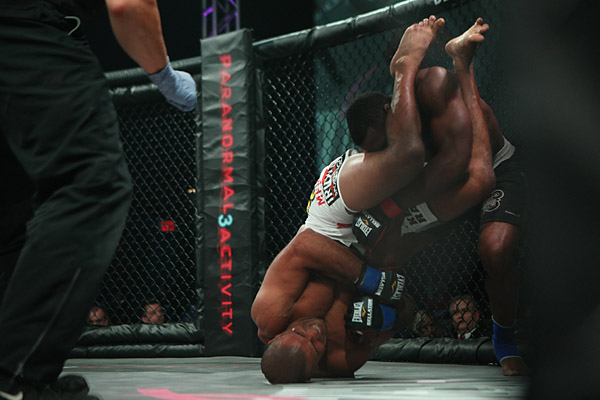 Santana started strong in his clash with Butcher from Mohegan Sun Arena in Uncasville, Conn., taking the fight to the floor and dominating his opponent for most of round one. However, Butcher turned the tables in the second stanza, hurting “The Arm Collector” with a short right uppercut before swarming him with punches to force the stoppage. The win granted Butcher passage to the Season 9 middleweight tournament semifinals, where he will meet Mikkel Parlo.

The head jiu-jitsu coach at Team Oyama, Santana began his pro MMA stint in 2005, rattling off 11 straight victories to begin his career. Santana competed for both Elite XC and M-1 Challenge before joining Bellator in 2011 on the heels of a 29-second submission victory over Doug Marshall at Tachi Palace Fights 10.

The Pan-American jiu-jitsu champion posted a 2-2 Bellator record before hanging up his gloves. Known for his grappling skills, Santana earned his nickname by picking up 16 submission victories, 13 of which came by way of armbar. The Brazilian-born Californian retires with a pro record of 18-3, with his recent defeat to Butcher serving as the only stoppage loss of his career.