After a brief feeling-out period, Casey decided to lock up with the Olympic silver medalist and was subsequently thrown to his back. After scrambling to his feet, however, it was Casey who initiated a takedown, securing Lindland’s back and locking up a body triangle. Lindland made the best of a bad situation and defended Casey’s choke attempts before finally turning the tables and gathering some momentum to end the round.

In round two, Lindland took Casey down quickly and nearly established the mount, delivering ground-and-pound while looking to improve position. Though the Rickson Gracie Jiu-Jitsu fighter looked for armbars from the bottom, Lindland would have none of it, each time breaking free of the submission attempt before locking up a cross-side crucifix and pummeling Casey for the last 20 seconds of the second round.

Casey, looking gassed, fell prey to an inside leg trip early in the third frame. From there, Lindland pinned “King” against the fence and landed hammerfists from half-guard. Casey had no answer for Lindland’s onslaught from the top, and referee Shawn Gregory saved a swollen Casey from further punishment at 3:41 of the third round. Lindland expressed both gratitude to the fans and respect to his opponent after the hard-fought win.

“Thank you guys so much for coming out. I think [Casey] will be a real tough welterweight force. He’s got a head like a rock. I hit him with some big shots, and he was still there,” said Lindland. 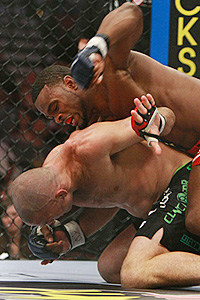 Woodley drew first blood, taking the former Oregon State All-American down, but Coy had no quit in him. As the fight wore on, he gradually gained confidence in the stand-up and scored several takedowns of his own. The fighters traded takedowns in the third round before Coy pinned his opponent against the fence and dropped blows to the head and body, grinding Woodley down as the fight ended. The crowd booed the decision when it was announced.

Woodley’s victory was not the only fight to be marred by controversy, however. After dominating his opponent for two-and-a-half rounds, Ohio product Roger Bowling was forced to retire after suffering an accidental palm strike to the eye. According to the rules, the judges rendered their decision based on the two completed rounds, and Bowling walked away with a dominant, albeit unsatisfying victory over veteran Bobby Voelker.

Bowling immediately showed his athleticism by taking Voelker down and cutting him under his left eye, using his speed advantage throughout the early going to land crisp punches and kicks from the outside. In round two, the undefeated Bowling picked up where he left off in the first round, dropping Voelker with a left hook and then connecting with a cracking liver kick.

After Voelker showed great heart to start the third, the accidental eye poke occurred, and referee Shawn Gregory finally waived off the contest at 3:22 of the round. The boos reigned down, and a disappointed Bowling threw up his arms in exasperation. As Strikeforce commentator Mauro Ranallo interviewed the victor, the boos swelled even greater, making it difficult to even hear Bowling’s apologetic response. 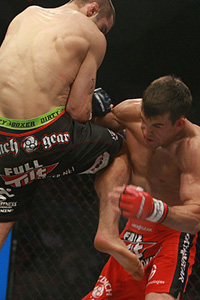 Dave Mandel/Sherdog.com
Saffiedine vs. Moore.
Belgian kickboxer Tarec “Sponge” Saffiedine earned the first knockout of his career at the expense of former Purdue wrestler Nate Moore. Both welterweights were throwing with bad intentions to start the first round, but neither connected. At the 2:40 mark, Saffiedine landed a jolting left hook that stunned Moore enough for the Belgian to briefly take his opponent’s back. Moore escaped the position, but was caught by a stiff thrust kick to the face and a flying knee to the sternum.

“The Sponge” continued to dominate the striking in what lasted of the second period, first landing a knee-buckling uppercut and then crumpling Moore with a heavy overhand right, forcing referee Dave Higgins to stop the contest at 1:21 into the second round.

“It feels awesome. I just couldn’t believe it. I didn’t feel it when I punched him. I just want to keep winning and then hopefully get that belt one day,” said Saffiedine.

In the first fight on the main card, Portland lightweight Pat “Bam Bam” Healy earned a tough unanimous decision over Bryan Travers. After a tentative first round, the second frame began with a bang, as both fighters traded shots before Healy secured a body lock and hoisted his opponent high in the air to the delight of the crowd. After a standing skirmish, Healy again gut-wrenched Travers and nearly took his back. For the remainder of the fight, the two traded throws as the crowd cheered both fighters for the three rounds of action.