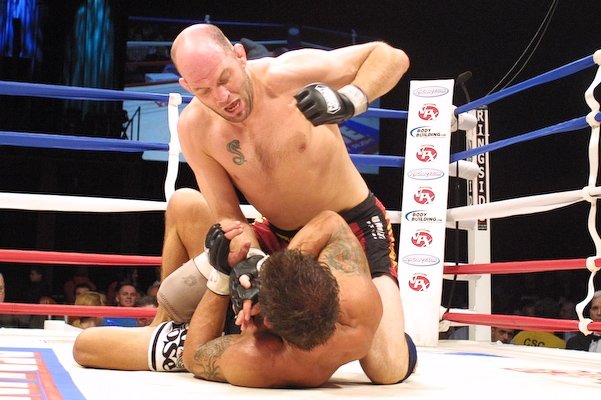 
Matt Lindland has fought everyone from Fedor Emelianenko to Quinton Jackson to Vitor Belfort.

On Friday in his backyard of Portland, Ore., he headlines a Strikeforce Challengers card against Kevin Casey.

Casey is a Brazilian jiu-jitsu practitioner -- reportedly a brown belt -- who has studied under Rickson Gracie. He is, however, just 3-1 in MMA as compared to Lindland’s 21-7 standing.

Lindland has studied the footage of his opponent that he could find, most notably Casey’s K-1 “Hero’s” stoppage loss to Ikuhisa Minowa in September 2007.

“Other than that, he took everybody down and just took them out in the first round,” Lindland said Monday during an appearance on the Sherdog Radio Network’s Savage Dog Show. “He’s a jiu-jitsu guy. He likes to get guys to the ground and try to submit them. He’s a big, powerful guy. He’s going to try to punch you and wrestle you. I just don’t see his wrestling skills being up to par. … If he gets a hold of you and throws you on the ground -- unless you know how to wrestle, he can do that, but I don’t see him doing that to me.”

Lindland was a silver medalist in Greco-Roman wrestling at the 2000 Olympic Games. During his stint in the UFC, he was considered one of the best middleweights in the world and fought for the title against Murilo Bustamante. He parted ways with Zuffa in 2005, though, and lost the only two bouts he fought last year.

Some critics believe his best days are behind him. Lindland says he understands why people might think that.

“I can see that,” he said. “I can see that coming off of losses, but you have to look at who I lost to. I lost to Jacare and Vitor Belfort, two of the top guys in the sport. I don’t think you necessarily need to write somebody off because of that. I’ve always taken really tough fights and not backed down from anybody. The Vitor fight, he just caught me with a great shot. He threw a straight left hand and I threw a looping one and his got there first. The next fight against Jacare, we all saw what happened there. Both are good guys.”

Ronaldo “Jacare” Souza caught him with an arm-triangle choke. Lindland has proven prone to submissions in his career, but Casey doesn’t figure to be at the level of Jacare, Bustamante or Fedor.

Regardless, Lindland has been preparing for him with the man expected to get the next shot at Anderson Silva’s UFC title: teammate and No. 2-ranked middleweight Chael Sonnen. “The Law” plans on taking out Casey and moving forward from there.

“I’m not writing myself off,” Lindland said. “I’m training hard. I’m in the room every day. I’m competitive with Chael (Sonnen), who’s the number one contender at middleweight. I’m right there training with him, side by side every day, so I think that the fans might be making a bit of a mistake or putting me out to pasture a little too early.”

More » Check out Lindland’s full interview for his thoughts on Sonnen vs. Anderson Silva, getting into slugfests and the controversial “Fighting Politics” documentary