Just 17 months after losing to Frank Mir via submission in his UFC debut, Lesnar avenged the defeat and unified the UFC heavyweight title Saturday at the Mandalay Bay Events Center in Las Vegas.

Mir had won their first encounter with a kneebar, and he grabbed for the leg again in the opening minute of the rematch.

The attempt was thwarted by Lesnar, who then spent much of the round pounding on Mir from half guard.

Mir wore a smile out for the second period, though. He clipped Lesnar with a short left hand and followed with a knee and a jumping knee. It was his best and only offense. What happened next was especially violent.

Lesnar took Mir down, pinned him against the cage, trapped an arm and pummeled his face until referee Herb Dean shoved his way in to stop the fight at 1:48.

Mir was clearly hurt. Lesnar taunted him and fans, which brought booing while Joe Rogan interviewed Lesnar after the fight.

“I love it!” Lesnar screamed back at his detractors. “Keep going, keep going!”

The massive heavyweight extracted his mouthpiece.

“Frank Mir had a horseshoe up his ass,” Lesnar said. “I told him that a year ago. I pulled the sumbitch out and beat him over the head with it.”

“He did a good job. He neutralized the stand-up,” Mir said. “I got against the cage and made a dumb mistake. I let a guy that big and strong catch my wrist, and I guess I still got more stuff to work on.”

Georges St. Pierre disposed of yet another top-notch welterweight challenger by earning a unanimous decision over Thiago Alves (50-45, 50-44, 50-45).

It was a dominant showing for St. Pierre, 28, who tied Randy Couture for the fourth most wins in UFC history at 14. The welterweight champion’s wrestling superiority was evident from beginning to finish. He grounded Alves, 25, several times in the first round, but he could not control him on the canvas. Back on the feet, Alves kicked harder, but St. Pierre snuck in his own strikes, as well, to win the stanza. 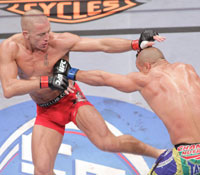 Photo by Sherdog.com
GSP defended his crown.
St. Pierre hurt Alves on the mat in the second. After luring Alves into striking, St. Pierre took him down and mounted him. He held the position only for a moment, but he busted open the American Top Team product’s nose from there and also battered him from inside the guard.

Alves had a better round for most of the third. He got his hands going and kicked well, but St. Pierre knocked him down with a straight right with roughly 35 seconds remaining. The welterweight champ then pounced on Alves with more strikes before the period closed.

A quick and easy takedown from St. Pierre started the fourth. The French-Canadian moved into the mount at one point but later missed an armbar and gave up the top position. Alves could have won the round with his offense from the top, but St. Pierre likely stole it by getting to his feet, finishing a takedown and taking Alves’ back.

Between rounds, St. Pierre told trainer Greg Jackson that he had pulled his groin.

“I don’t care,” Jackson said, rallying his charge for the final round.

The period played out the same as the four before it. Alves, whose face was swollen and bruised, was gutsy in climbing back to his feet each time he was taken down, but St. Pierre’s wrestling was unstoppable.

“I don’t know what happened, but I am in real bad pain,” St. Pierre commented after the fight on his injury. “It happened in the third round and when I was on my back. … It could have been a very bad night for me if this thing would have turned bad.”

It didn’t, though, and now St. Pierre will face inevitable questions about a move to 185 pounds to challenge champion Anderson Silva.

“It’s a question of timing,” he said of the possibility. “I walk around at 185 pounds. I am not that big for a welterweight either. So if I move up, like I said, I don’t fight to be champion anymore because I am a champion. If I do it, it’s for a challenge, but I am going to have to take the time to gain weight and really take care of business.”

Dan Henderson flattened Michael Bisping 3:20 into the second round of a middleweight matchup between opposing coaches from the most recent season of “The Ultimate Fighter.”

Henderson stalked Bisping around the cage throughout the fight while winging a heavy right hand. In response, Bisping kept circling and tried to counter without success. The end came after Bisping flicked a left hand, which dropped his guard, and then ate a big right Henderson had loaded up on. A follow-up punch from Henderson on the ground stiffened Bisping, who lost for the first time at 185 pounds.

“I think that one was just to shut him up a little bit,” said Henderson of the last punch on the already unconscious Bisping.

Henderson said he might have quieted his opponent for “a little while.”

Both men landed big shots in an entertaining first round. Akiyama, who was debuting in the UFC, scored more points by connecting with kick-punch combinations and a superman punch. However, Belcher also did damage with kicks and dropped Akiyama with a left hook.

Akiyama tripped his opponent to begin the second round. He had to win a scramble to stay in the top position, where he postured up and hammered Belcher with a pair of punches before slowing down. Back on the feet, Akiyama looked tired as Belcher kicked at his legs and rallied back in what was a close period.

Belcher went back downstairs with kicks in the third. He worked Akiyama’s lead leg and mixed in body shots and short punches that closed the judo black belt’s left eye. The best strike came when Belcher shoved off the cage and drilled his foe with a Superman punch. Akiyama had a solid chin, however, and also used a good right hand counter that helped him win the fight.

Jon Fitch outgrappled Paulo Thiago to prevail in their welterweight fight. Thiago neutralized the American Kickboxing Academy standout during the first round by working on a guillotine after giving up a takedown.

Fitch turned it on in the second and third rounds. He took Thiago down, took his back numerous times and also advanced to the mount briefly to win a unanimous decision (30-27, 29-28, 29-28).