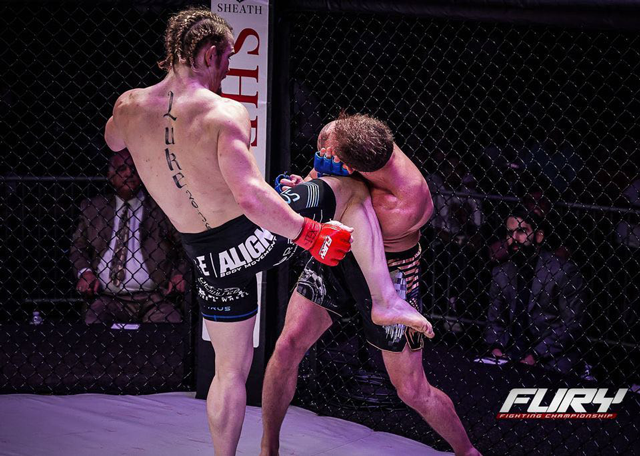 
If cancer couldn’t stop Kolton Englund, best of luck to anything or anyone else between him and a shot at regaining the Fury FC lightweight title.

In the main event of Fury FC 48 on Sunday, “The White Assassin” scored a third-round knockout of Alec Williams, his third straight win since returning in March from the health issues that had kept him on the shelf since 2019. Englund took control of the cage from the start, stalking Williams around the perimeter of the cage and tagging him with heavy punch combinations. Williams worked hard for takedowns in the second round, but failed to secure any, and Englund nearly finished the fight late in the round, dropping Williams with punches and teeing off as referee Jeff Rexroad looked on closely. Williams survived to hear the bell, but Englund picked right back up where he left off in Round 3. The end came at 4:34 of the round, as Williams wilted under a pair of huge hooks to the head.

That brutal performance elevates Englund to 9-3 as a professional and earns him a shot at the Fury lightweight title currently held by Le'ville Simpson. In defeat, Williams falls to 7-3.


In the co-main event, longtime Legacy Fighting Alliance bantamweight standout Levi Mowles made quick work of UFC veteran Teruto Ishihara, taking his back and choking him all the way to sleep in half a round. Ishihara kept things interesting in the early going, landing a question-mark kick to the head and several hard body punches. Once the two men clinched, however, it was all one-way traffic, as Mowles easily took Ishihara’s back standing, hopped up and locked on a body triangle from back mount. Mowles then cinched up a tight rear-naked choke, leading to the unfortunate final finishing sequence. Ishihara fought the choke, reddened and then appeared to lose consciousness for several seconds before referee Rob Alexander intervened.

Controversial stoppage aside, the completely dominant grappling display earned Mowles (15-4, 2-0 Fury FC) his fifth straight win. Mirroring Mowles’ rise, the free-falling Ishihara has now lost five in a row, including the three-fight skid that led to his UFC release.


Arut Pogosjan made an impressive Fury FC debut, dropping Josh Altum with a big left hand and finishing with ground strikes in their main card lightweight matchup. Altum, stepping up a weight class on short notice, experienced success in some wild early exchanges, going for a flying scissors takedown, working hard to bring the fight to the ground and even scoring a flash knockdown. However, Pogosjan quickly began to impose his greater size and sharper strikes, rocking Altum with punches to the head and body. Late in the first round, Pogosjan landed the left that dropped Altum, and a few standing-to-ground right hands sealed the deal at 4 minutes, 50 seconds. The win sends the Colorado-based Armenian to 8-3, while Altum falls to 4-2 (1-1 Fury FC).


Randy Villarreal notched his second straight win in the Fury cage, taking a unanimous decision over former Fury flyweight champ and two-time Dana White's Contender Series veteran Jacob Silva. Villareal’s rangy southpaw kickboxing seemed to frustrate the shorter Silva, and Villarreal struck for several well-timed takedowns as well. Silva threatened with a second-round guillotine, but Villarreal defended well and was able to take top position for most of the rest of the round, moving to Silva’s back and threatening with a neck crank. Silva made things interesting in the final frame, ending up on top after a blown takedown by Villarreal, working from within the taller man’s guard, and landing a couple of hard shots late. It wasn’t enough in the end, as Villarreal prevailed by unanimous 29-28 scores to raise his career tally to 11-12 (2-0 Fury FC). Silva has hit a rough patch, as he is now 1-4 in his last five, dating back to his Contender Series appearances.


Joey Elzea put a stamp on a fast-paced flyweight battle, lamping Ramiro Ruiz Castillo with a beautiful left head kick with just five seconds to go on the clock. The fight up to that point had been closely contested, with both men inflicting damage on the feet and Ruiz experiencing some success landing takedowns. If anything, Ruiz appeared to have the momentum heading into the final round, as the cageside doctor examined Elzea’s badly swollen right eye closely before allowing him to head back out. The 31-year-old native of Washington state capitalized on the opportunity, nailing Ruiz with a completely unblocked head kick in the waning seconds. Ruiz dropped instantly and referee Jeff Rexroad dove in for the stoppage, staving off any further punishment. With the sensational win, Elzea puts his first career loss in the rear view and moves to 7-1 overall, while Ruiz falls to 5-4 (2-2 Fury FC).


Josh Walker and Jonathan Eiland were near mirror images of one another — other than the 14-year age gap — as they engaged in a wild three-round bantamweight scrap marked by furious exchanges on the feet and grueling, scramble-heavy wrestling sequences. The 23-year-old Walker took the first round, striking for takedowns and spending the bulk of the five minutes in superior positions on the ground. The 37-year-old Eiland came roaring back in the second, taking advantage of an early slip by Walker to nail him with a standing-to-ground punch and get the better of a back-and-forth five minutes. Walker came back strong in the third, and was rewarded by the judges with unanimous 29-28 scorecards. With the win, W4R Training Center export Walker moves to 4-0 in his professional career; Eiland falls to 4-3.


Former UFC heavyweight Juan Adams put on an absolute clinic in wrestling and top control, throwing Eric Lunsford all around the cage before locking up a rear-naked choke for the finish. The former NCAA wrestler didn’t even have to shoot for a takedown, as Lunsford slipped on a kick early and Adams was able to capitalize. From there, everything was academic: a few mat returns — including a pair of resounding slams — and relentless ground punches softened up Lunsford. By the time Adams slapped on the choke for the tap at 3:27 of Round 1, it felt a bit like an act of mercy. With the completely dominant performance, his second straight win since his UFC release, Adams moved to 7-3 and earned a shot at the Fury heavyweight belt currently owned by Richard Odoms; Lunsford falls to 5-3 in defeat.


In the main card opener, Yadier Del Valle handed Aric Mercado his first professional loss, winning by a unanimous decision that was far more one-sided than the final scores indicated. Del Valle got out to a fast start, dropping Mercado with punches within the first minute, then diving into top position, where he spent the remainder of the round threatening with ground strikes and submission attempts. The second round offered more of the same, as Del Valle struck for a takedown early, moved quickly to the back and worked for a rear-naked choke on the taller man. Mercado fought off the choke, but Del Valle cinched up a body triangle from back mount and spent the balance of the round throwing short strikes and working for the choke. The final frame was more competitive only in the sense that Mercado managed to keep Del Valle in his guard for more of the round, avoiding most of the ground strikes and submission attempts that had characterized the first two rounds.

While the first two rounds could easily have been scored 10-8, the judges awarded the fight to Del Valle by unanimous 30-27 scorecards. With the dominant win, the 24-year-old Cuban-American prospect moves to 3-0 as a professional, while Mercado falls to 3-1 in defeat.