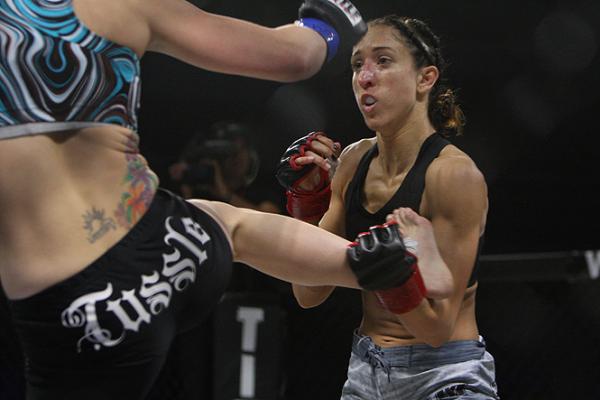 Penne (10-1, 2-0 Invicta) put away the previously unbeaten Japanese standout 2:20 into round two. The 29-year-old has finished her last three foes.

Jabs and knees, a takedown and some mild ground-and-pound in half guard sent Penne to the second round with the advantage. There, she delivered another takedown, this time from the Thai plum, but wound up underneath Sugiyama (8-1, 0-1 Invicta). Before the Jewels veteran had a chance to capitalize, Penne cinched the triangle choke. Her situation dire, Sugiyama fought valiantly to escape, but her effort proved fruitless and she was left with no choice but surrender.


The well-traveled Shayna Baszler, a protégé of former UFC heavyweight champion Josh Barnett, submitted Sarah D’Alelio with a rear-naked choke a little more than half a minute into the second round of their bantamweight co-main event. D’Alelio (6-3, 2-1 Invicta) tapped out 37 seconds into round two, her modest two-fight winning streak a thing of the past.

Baszler caught a break early in the second round, when D’Alelio slipped while firing a right hook. “The Queen of Spades” moved in with punches, transitioned to D’Alelio’s back during a subsequent scramble and locked in the choke. The tapout came next, giving Baszler (15-7, 1-1 Invicta) her ninth win in 12 fights.


Bellator Fighting Championships veteran Leslie Smith wiped out Kaitlin Young with second-round punches in a featured bantamweight battle. Smith (4-2-1, 1-0-1 Invicta) sealed it 2:19 into round two, six months after she fought Young to a split draw at the Invicta premiere.

Smith countered a takedown attempt by rolling for a kneebar in the second round. Soon, she was in top position, landing punches inside the Young guard. Smith then escaped an armbar, trapped Young (7-7-1, 0-2-1 Invicta) in a topside crucifix and brought it to a close with a volley of unanswered punches.

Daly No Problem for Honchak

After a competitive first round, Honchak found another gear. In the second, she moved to Daly’s back and transitioned between that position and full mount, threatening with a rear-naked choke and battering the Irishwoman with punches. Honchak did the same in round three and answered a late flurry from Daly (13-4, 0-1 Invicta) with solid counters.


Brilliant striking and airtight takedown defense carried Jungle Fight veteran Vanessa Porto to a lopsided unanimous decision over Tara LaRosa in a flyweight showcase. All three judges scored it the same: 30-27 for Porto (14-5, 1-1 Invicta). LaRosa (21-3, 0-1 Invicta) entered her promotional debut with 18 wins in her previous 19 appearances.

Porto knocked down the 34-year-old Woodstown, N.J., native with a pair of right hands in the first round, brutalized her with leg kicks in the second and turned up the heat in the third. There, she denied LaRosa’s attempts to move the fight to the ground, resumed her attack on the legs and countered beautifully with right hands.


The undefeated Cat Zingano kept her perfect professional record intact, as she submitted Raquel Pennington with a second-round rear-naked choke in a featured bantamweight tilt. Pennington (3-2) asked out of the match 3:32 into round two.

Zingano (7-0) clinched, softened Pennington with knees to the body and secured a takedown. She settled in side control and fed Pennington a series of elbows before moving to mount. Pennington surrendered her back and supplied the Coloradan with an opportunity for the choke. Zingano obliged.


Jackson’s Mixed Martial Arts export Michelle Waterson delivered her fifth win in as many outings, as she eked out a split verdict over Lacey Schuckman at 105 pounds. Two of the three judges, Kevin Champion and Henry Gueary scored it 29-28 for Waterson (10-3, 1-0 Invicta); a third, Victoria Miller-Pence, ruled 29-28 in favor of Schuckman (7-6, 0-2 Invicta).

Schuckman did her best work in the opening round, where she threatened “The Karate Hottie” twice with submissions, first with a rear-naked choke and then a keylock, and later swarmed her with punches. Waterson returned fire in the second, as she wobbled Shuckman with a head kick, moved into position for a rear-naked choke of her own and racked up points with punches in guard.

Round three was close and far from decisive. However, Waterson countered effectively, answered a Shuckman takedown by sweeping into mount and landed a late front kick to the face.


Strikeforce veteran Julia Budd dismissed Danielle West with a series of first-round elbows and punches in a featherweight showcase. The end came 2:32 into round one.

Budd (4-2, 2-0 Invicta) struck for a takedown, moved immediately to mount and unleashed elbows. West (4-4-1, 0-1 Invicta) tried to free herself, but there was no escape. More elbows and punches followed, resulting in the stoppage. Budd has recorded back-to-back wins since her November 2011 submission defeat to reigning Strikeforce bantamweight champion Ronda Rousey.


In preliminary action, Team Oyama’s Carla Esparza stopped Lynn Alvarez on punches 2:53 into round one; Joanne Calderwood knocked out Ashley Cummins with a knee to the body 3:13 into the first round; Stephanie Frausto needed less than a minute to put away Amy Davis, as she scored a guillotine choke-induced submission 48 seconds into round one; Jessamyn Duke coaxed a tapout from Marciea Allen with an armbar 4:42 into the first round; Tecia Torres captured a unanimous verdict from Kaiyana Rain, sweeping the scorecards by identical 30-27 counts; and Ediene Gomes submitted Katalina Malungahu with a rear-naked choke 4:19 into round one.