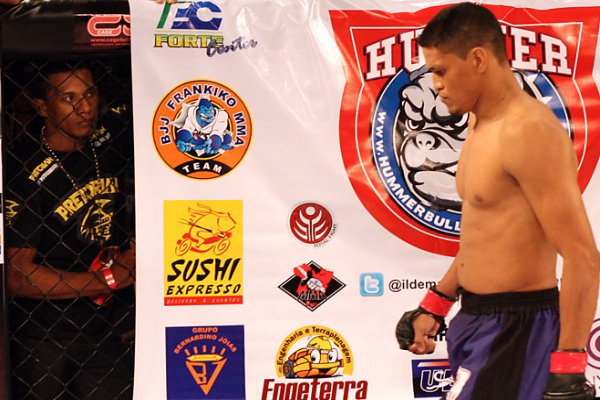 Alcantara, the younger brother of UFC featherweight Iuri Alcantara, seemed to have the fight in the bag after clipping Jones and securing back mount in the opening 60 seconds. Jones wouldn’t go down that easily, however, as the Champion Team representative slipped out the back door and worked to close the gap with punches and leg kicks late in the round.

The second round was defined by the clinch work of Jones, save for an Alcantara takedown in the last 60 seconds; both men had their positional control interrupted by confusing breaks from referee Paulo Borracha. Jones came on strong in the final round, unleashing his most potent offense of the match by dropping brutish punches through Alcantara’s guard, but he finished the fight in an exhausted clinch on the fence.

Jones’ output was enough to convince one cageside judge, but not the other two, who awarded Alcantara the split decision; scores were not announced. The win, Alcantara’s ninth in his last 10 fights, places him two fights away from the title recently vacated by the last man to defeat him, current UFC talent Marcelo Guimaraes.

The 23-year-old from Manaus escaped an early Passos heel hook and then went to work from top position, where heavy ground-and-pound preceded a textbook mounted triangle. Campos rolled onto his back and forced the tap at 4:05 of the opening round, extending his winning streak to seven and putting his name in discussion for the vacant Jungle Fight featherweight title.

Douglas Bertazini and Douglas del Rio both threw heavy hands from the onset of their welterweight affair, but it was Bertazini who walked away with the knockout. A big left hook from the southpaw sent del Rio tilting to the mat, where “El Loco” Bertazini finished the job with coffin-nail punches. Referee Douglas Aires stepped in to save the unconscious del Rio at 3:45 of round one.

Bolivian lightweight Carlos Bazan Rojas used a grinding top game to outwork Rio de Janeiro’s Claudiere Freitas across 15 minutes. After a relatively close opening frame which saw the fighters exchange guillotine attempts, Rojas dropped Freitas with a left hook early in round two and spent the rest of the period in top position. Another takedown in round three combined with a botched Freitas guillotine to seal the deal for Rojas, who earned the nod from all three judges.