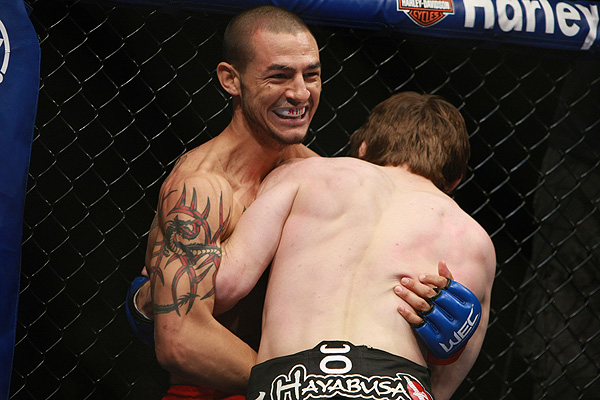 Cub Swanson suffered a quick defeat the first time he fought Jose Aldo, but he has no doubt that he’d win a rematch -- or rematches.

“I know that I could win that fight 10 out of 10 times if we did it again,” Swanson told the Sherdog Radio Network’s “Beatdown” show. “It’s not even an issue to me anymore. I’d actually like my brother -- would love for my brother -- to fight him, who’s an up-and-comer, which I feel is more of a fair fight. I don’t really feel like [himself vs. Aldo] would be a fair fight at all.”

Aldo landed a flying knee right out of the gate in their June 2009 encounter at WEC 41. The Brazilian, who is the current UFC featherweight champion, then followed up with punches to finish Swanson in just eight seconds. However, the 28-year-old Swanson has been improving. He’s won three straight, including a first-round knockout of Charles Oliveira on Sept. 22 at UFC 153.

“I definitely feel like I don’t get credit, but I’ve always taken that as kind of my fault,” said Swanson, citing his up-and-down tenure in the WEC. “I’ve been inconsistent. It’s the way this game is. There’s so many ways to lose and to win. When you’re drastically trying to make improvements in your game, sometimes you get lost in what made you great. Finding a balance in your game is a delicate thing. I feel like those wins and losses were really my growing period. I feel like right now is the time where everything’s coming together and everything’s just flowing for me. I feel unstoppable right now.”

Not only has Swanson won three straight, he’s scored three consecutive finishes. It’s been an impressive run, which has surely helped his standing in the UFC 145-pound division.

“I’m right there. I know I am,” Swanson said when asked where he stands in the class. “The way the UFC is, if you win decisively, it’s kind of jumping you through the ranks. I’ve been the underdog in my last three fights, and those were all quality opponents and I was able to win decisively. I feel like I should be right there, but there’s a couple of people that are obviously ahead of me. I kind of got to wait my turn and I’m OK with that. I’ll take another fight before I get a title shot if I need to or whatever. I’m happy fighting right now.”

Besides Aldo, Swanson is looking for a fight against an entertaining opponent. In particular, he named Chan Sung Jung (“The Korean Zombie”), Erik Koch and Ricardo Lamas.

“I want all three of those pretty bad,” Swanson said. “The Koch fight, I think he’s a real tough kid. I was supposed to fight him twice and I feel terrible that I wasn’t able to follow through with that for the fans and for him. That’s something I want back. The Zombie is just somebody who everybody loves. Everyone thinks he’s the best up-and-comer, and I don’t think so. That’s somebody I would love to throw down with. Lamas, he’s a stud and I felt like that was my fight and I messed up and I would like to give it another shot.”