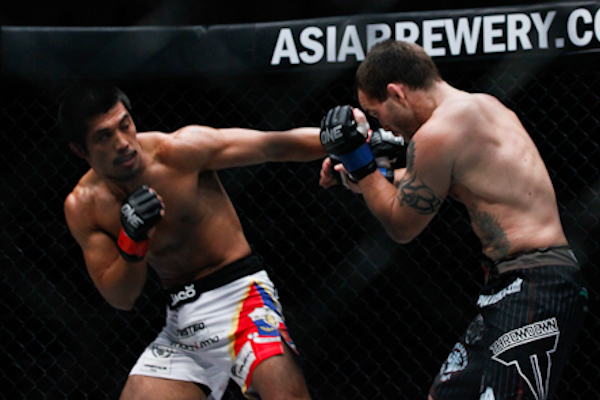 On the verge of the biggest fight of his career, Eric Kelly is man with perspective. Once without even a proper place to sleep or money to buy a meal, Kelly now stands just one victory away from becoming the first One FC featherweight champion.

“The Natural” will lock horns with Honorio Banario Saturday in the main event of One FC 7, which streams live on pay-per-view following a preliminary card stream on Sherdog.com. The event takes place at Putra Indoor Stadium in Kuala Lumpur, Malaysia.

Born in Baguio City, Philippines, Kelly traveled to Manila years ago to pursue his dream of becoming a professional fighter.

“Before, it was really, really hard. I had no money, but I tried to find a way. Then I got injured, and I went home,” Kelly recently told Sherdog.com of his first trip to his country’s capital. “I wanted to be a wushu fighter so bad, but they just threw me away. They didn’t help me to heal my injury, and they totally cut off my allowance. I had a kid, and I was very sad at that time. I went home, and I couldn’t train anymore, but I always knew that when my injuries healed that I would go back to Manila.”

Kelly indeed returned to the capital but not to his first love of wushu. Poor and trying to make ends meet, he took several jobs before finding a position as a bodyguard for Pablo Glean, security aide to the mayor of Makati City. Two attempts on Glean’s life were made in 2006 while Kelly was in his employ. Kelly was present for the first, unsuccessful hit. During the second attempt -- which resulted in Glean’s death -- Kelly was off duty, spending time with his family for his son’s birthday.

Kelly quit the bodyguarding business and turned his full attention to mixed martial arts, making his pro debut in 2009 and winning the Universal Reality Combat Championship featherweight title in just his fifth bout. His performances in the Philippines-based organization caught the eye of One Fighting Championship brass, who signed the fighter in 2011.

Three straight wins would follow for Kelly in the One FC cage, as he topped Mitch Chilson, Bae Young Kwon and former UFC lightweight king Jens Pulver before returning to the URCC this past December to submit Brad Terry with an eleventh-hour armbar on Dec. 1.

With nine victories under his belt, Kelly, who now lives and trains in Malaysia, will next fight to become One FC champion. Despite the inherent pressure of such a situation, Kelly says the large stage has only served to focus him further.

“I feel a little bit nervous, because I’m afraid to lose. That’s why I’m doing my best to train hard for this fight now. I’m going in to show myself that I can fight, and I will do my best to try to get that belt,” said Kelly. “I just try to do my thing and try to defeat my opponent [inside the distance]. I’m not worried. I just want to prove myself.”

Though Kelly has dedicated himself to the task at hand, he is also open about his hopes of one day fighting the best featherweights in the sport.

“I think that [UFC champion] Jose Aldo is very skillful. That’s my dream opponent that I want to fight. I like watching his fights, and I want to test my skills against him and see what would happen.”