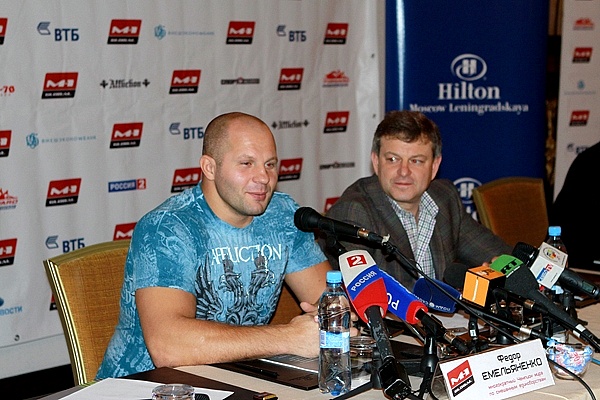 Both Fedor Emelianenko and Pedro Rizzo made weight at the M-1 Global “Fedor vs. Rizzo” weigh-ins on Wednesday. Emelianenko checked in at 235.9 pounds, while Rizzo tipped the scales at 244 ahead of their titular heavyweight headliner, which takes place Thursday at the Ice Palace in St. Petersburg, Russia.

Once regarded as the sport's top heavyweight, Emelianenko has stumbled in recent times, suffering a trio of consecutive losses inside the Strikeforce cage prior to receiving his promotional walking papers. The former longtime Pride Fighting Championships ruler rebounded with a pair of victories to close out 2011, however, outpointing Monson in November before dispatching Satoshi Ishii just over five weeks later on New Year's Eve in Japan.

Rizzo, 38, returns to the ring after nearly two years on the shelf. “The Rock” last competed in July 2010, knocking out UFC Hall of Famer Ken Shamrock. The win marked the third straight triumph for the former three-time UFC heavyweight title challenger, as Rizzo previously bested Gary Goodridge and Monson before taking out the 48-year-old pioneer.