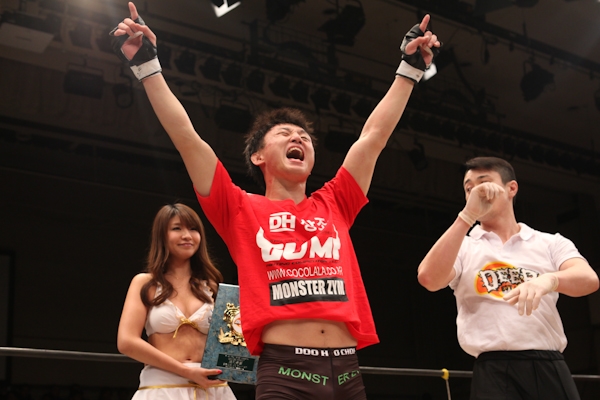 TOKYO -- Caged MMA finally made its way to the legendary Korakuen Hall on Saturday night with Deep’s “Cage Impact 2013 in Korakuen Hall.”

The fight picked up speed in the early seconds as both fighters made it obvious they were after a knockout. Murayama wobbled Choi in a wild exchange against the cage, but the young Korean recovered quickly and the fighters spent the remainder of the round going blow for blow, with both men earning multiple knockdowns despite being on the brink of consciousness.

Round two followed the same pattern, as Choi was stunned again early in the round. After a successful takedown, Choi looked for submissions from the top, but wound up having his position reversed and Murayama stood above his open guard. The fight-ending sequence began with a stiff upkick from Choi that quickly dropped the local fan favorite. Murayama struggled back to his feet and was able to trade blows with his opponent briefly before a hard right hook flattened him. Referee Yuji Shimada stepped in to end the fight at 2:33 of round two, extending 22-year-old Choi’s winning streak to nine straight.

In a middleweight fight tailor-made for a KO finish, Ryuta Sakurai needed little more than a minute to finish karateka-turned-pro-wrestler Yuji Sakuragi. Sakurai opened with his usual blistering pace, trading heavy punches with the Pancrase knockout artist until a right hook staggered sent Sakuragi reeling against the cage. Before his opponent could slump all the way to the mat, the R-Blood team leader threw in a huge flying knee for good measure, and referee Shimada waved off the fight after only 64 seconds.

In a lightweight battle of former Deep titleholders, Katsunori Kikuno earned a quick KO victory over Jutaro Nakao, catching the former welterweight with a right-hook counter as Nakao stepped into range. A bored-looking Kikuno finished off his opponent with an unnecessary stomp to the face as referee Yoshinori Umeki rushed in to end the bout at the 1:07 mark.

Sengoku veteran Kazunori Yokota picked up an easy submission win over outmatched newcomer Eun Kyum Kim, using an inverted triangle to set up a far-side keylock from side control. The tap came 4:02 into round one.

At light heavyweight, Shunsuke Inoue capped a dominant first round with an early-second round knockout of Atsushi Yamada. In the opening seconds of round two, Inoue landed a right hook that spun Yamada around. Inoue pounced from behind, throwing punches to Yamada’s head until referee Oshiro stopped the fight 16 seconds into the round.

Welterweight Yoshitomo Watanabe got caught with his hands down, eating a left hook from Yuki Okano in the second round that sent him straight to the mat. Okano pounced and referee Oshiro dove in to end the bout at 0:26 of round two.

In yet another early finish, bantamweight Koichi Ishizuka took little more than half a round to defeat Yoshiki Harada with a rear-naked choke at 3:54 of round one, while welterweight Sanshiro Nakakura needed only 3:32 to earn his rear-naked choke victory over Takahiro Kawanaka.

In the night’s opening fights, flyweight Hayato Suzuki beat Kota Ishibashi via rear-naked choke at 0:44 of round one, and welterweight Yusaku Fujisawa earned a split decision win over Tatsuya Tomozane.