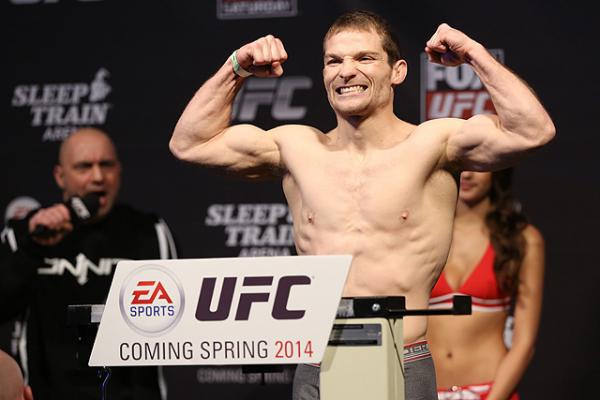 Zach Makovsky got the call to fight Scott Jorgensen on just 10 days’ notice, but he found a way to win Dec. 14 at UFC on Fox 9.

In an interview with the Sherdog Radio Network’s “Beatdown” show, Makovsky discussed his Octagon debut, his opponent and more.

On filling in on such short notice: “Before I got the offer, I heard that [John] Dodson was hurt and possibly out of the fight. My manager called me and was like … ‘Would you like me to put your name in and be proactive and see if we can get this fight?’ And I said, ‘Yeah, of course. We might as well be proactive and go after it.’ I guess as he was calling, Sean Shelby called my manager and asked if I wanted the fight. It was kind of all working out at the same time.”

On preparing for the fight: “Once I actually got the fight, I was very excited but very nervous at the same time. Ten days preparing for a UFC fight against Scott Jorgensen -- it was pretty intense, and I had a lot to do in a short period of time, but it was the opportunity I was waiting for for a very long time, so I was more than happy to do it.”

On Jorgensen’s style: “I think he has a more boxing-oriented attack than like a muay Thai attack or anything. He uses his hands a lot more than kicks. The guy I just fought in RFA, Matt Manzanares, was a Junior Olympic boxer and, I felt, had somewhat of a similar standup style. I just felt like Jorgensen had more power and was obviously a much higher-caliber wrestler and grappler in general. I kind of kept the same kind of ideas that I wanted to use in the fight previous. I just knew it’d much harder to get takedowns and control him there. I felt like it was good timing for that fight.”

On whether out scrambling Jorgensen made the difference when it came to the decision: “It was definitely a big part of it, I think. We both come from pretty strong wrestling backgrounds and we both scored takedowns in the fight. It was kind of that ability to control the takedowns and then control the top position if we got there that would be a big factor. We both were scrambling and exchanging position, and especially in that third round, I was able to get his back and control him a little bit more. It wasn’t easy by any means, but I think that was a big part of it.”

On whether being a champion in Bellator prepared him for the UFC: “I think so. I think the fights in Bellator, with the TV production, the whole week, the whole days leading up to the fight are pretty similar, so I was kind of used to all that. RFA did it very similar too. I’d say it definitely prepared me to be there, but I don’t consider myself a Bellator guy anymore than I would an RFA guy or an EliteXC guy or any of the other promotions I’ve fought for.”