Check out the MMA Forums to discuss the card or enter your comments and predictions below. The community is currently discussing Tuesday night's card here. 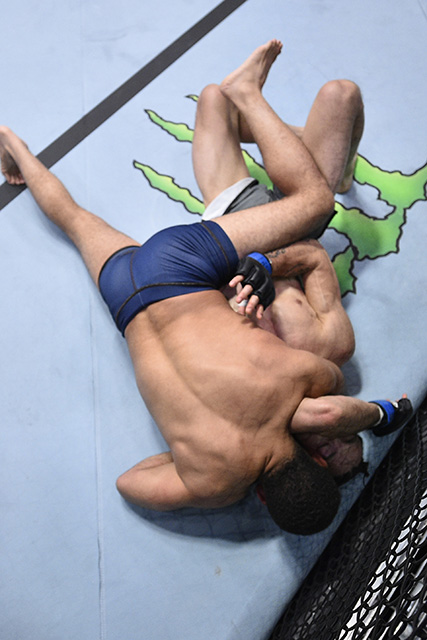 (+ Enlarge) | Photo: Getty/UFC
Leavitt made quick work of Flores.
Flores immediately lands an inside low kick, and moments later, Leavitt shoots for a low single-leg and gets his opponent to the canvas. Flores frames a triangle; Leavitt stands and slams his man back down. Flores lets go of a kimura and Leavitt remains on top in guard. Leavitt is doing his best to stay active, landing short punches to the ribs and the occasional elbow. Leavitt passes to side control and then threatens with a guillotine as Flores attempts to stand. Flores is back to his feet but elects to pull guard near the fence. Leavitt takes the back as Flores attempts to work his way back up. Leavitt powers his foe back down, nearly mounting him while landing some left hands under Flores’ armpit. In a matter of moments, Leavitt locks in an arm-triangle choke and applies the squeeze. He doesn’t even need to completely pass to the proper side before Flores taps out. The Syndicate MMA product wins for the second time in less than three weeks and remains undefeated.

Rodriguez takes the center of the cage early in this matchup of young flyweight prospects. Rivera starts off mixing up his kicks to the legs, body and head. Rodriguez slips after absorbing a low kick, and Rivera quickly jumps on his foe’s back and secures a body triangle. Rodriguez is doing his best to fight off Rivera’s hands. The Mexican fighter absorbs some punches to the head but is able to turn into his opponent and assume top position. The lanky Rivera is active from his back, and Rodriguez is forced to escape from an armbar. They scramble back up and Rivera presses his opponent against the fence. Rivera lands a knee on the break. Rodriguez appears to land a clean jab just before Rivera changes levels for a takedown. Rodriguez defends well with his back to the fence, and he reverses position and narrowly misses a spinning elbow. They separate and Rivera attacks with jabs and front kicks at range. Rodriguez whiffs on a massive overhand right. A low kick from Rodriguez makes Rivera lose his footing, and then moments later he executes a body-lock takedown on the Santa Fe, New Mexico native. Rodriguez is on top, and he stands and tries to drop some heavy ground-and-pound before the horn. 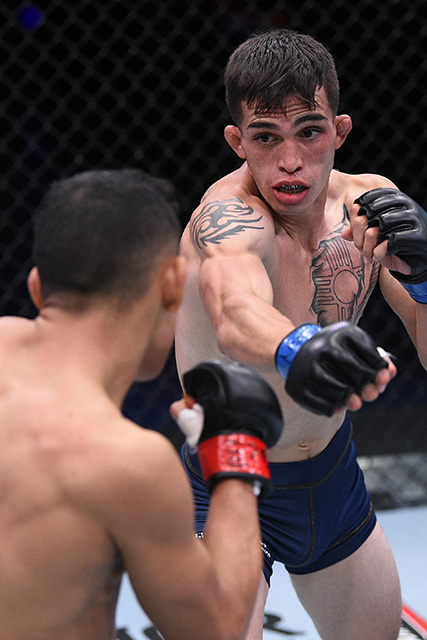 (+ Enlarge) | Photo: Getty/UFC
Rivera took a close decision.
An overhand left from Rodriguez lands, and then he catches a Rivera kick and lands a big right hand. The flyweights clinch against the fence, and Rodriguez shoves him off. Rivera is using low kicks and front kicks to keep his adversary at bay. Rodriguez, meanwhile, is throwing power punches to the head. Rivera catches a kick that lands to the body and looks for a single leg. Rodriguez can’t quite execute a counter judo throw but it allows him to take control in the clinch against the fence. Rodriguez slams Rivera to the mat against the fence and then transitions to his foe’s back. Rodriguez is now framing an armbar from the position, but the fence is limiting his ability to extend the limb. Rodriguez also has Rivera trapped in a triangle, and he adds some elbows to the head, as well. Rivera is in an awkward position as Rodriguez maintains the triangle. Rivera scrambles free and they’re back up. Rodriguez just misses a spinning back fist as they separate. A front kick connects for Rivera in the waning moments. Rivera misses a cartwheel kick and Rodriguez dives in with a right hand just before the horn.

Rivera lands a front kick, and Rodriguez shakes it off and grins. A variety of kicks continues from Rivera as Rodriguez tries to close the distance. The Mexican flyweight forces the clinch against the fence and changes levels for a takedown. Rivera defends, but moments later Rodriguez drops low for another takedown try only to eat several hard elbows to the head for his efforts. Rodriguez escapes a triangle and takes back control against Rivera. Rivera is working hard to get up, but his opponent is all over him. They return to their feet and Rivera lands a glancing elbow in the clinch. Rodriguez counters a low kick with a clean counter left. Rivera shoots and Rodriguez stuffs the takedown attempt. Rodriguez is in top position now, as Rivera attempts to remain active with his guard. Rodriguez scrambles to back control, but he’s too high and slips off the top. They’re back up in a hurry and Rivera lands a couple knees to the body before Rodriguez secures a body lock. Rodriguez changes levels and gets Rivera down near the fence. Rodriguez ends the fight on top, dropping a couple punches just before the horn. 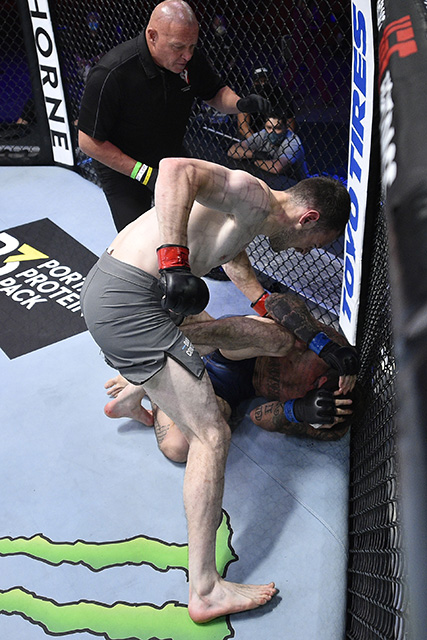 (+ Enlarge) | Photo: Getty/UFC
Medic made it look easy versus Gonzalez.
Medic takes the center and lands a couple of hard leg kicks early. Medic just ducks under a side hook kick, but Gonzalez lands a spinning high kick moments later. Plenty of spinning attacks from Gonzalez early -- although few are landing -- while Medic attacks the legs and then stings Gonzalez with a clean left hook. A vicious body kick makes Gonzalez crumble near the fence and Medic pounces for the finish. Gonzalez saves himself with a leg lock, and Medic escapes and allows his foe to get back up. A straight left followed by a low kick sends Gonzalez to the floor against the cage, and Medic tees off with standing-to-ground punches — including some to the body — as his foe covers up. Medic continues to unload on a defensless Gonzalez and referee Chris Tognoni has seen enough. This one is over.

The light heavyweights touch gloves and we’re underway. Jacoby fires off a hard low leg kick. Jacoby lands a flying knee near the fence and follows it with a two-punch combination. Another flying knee just misses for Jacoby, who then counters Flores with a short left hook. Flores smiles after landing a thudding body kick. Jacoby stalks his man and lands a straight right. Flores fires off a couple leg kicks that land, but Jacoby backs him up with a striaght left. Jacoby has Flores against the fence, and he’s teeing off with punches and elbows. Flores changes levels and Jacoby sprawls. Flores stands, and Jacoby lands a big right hand and more elbows. Jacoby with a whipping low kick. Jacoby stalks and lands a body kick followed by a right hand. He defends a takedown and batters Flores with punches and elbows in close quarters against the cage. flores is starting to wear the damage with a mouse under his right eye. Jacoby is continuing to do a nice job mixing up his kicks, knees and punching combinations. Flores is struggling to find the range on his combinations. Jacoby eats a high kick and shakes it off. Jacoby has another high kick blocked before the horn. 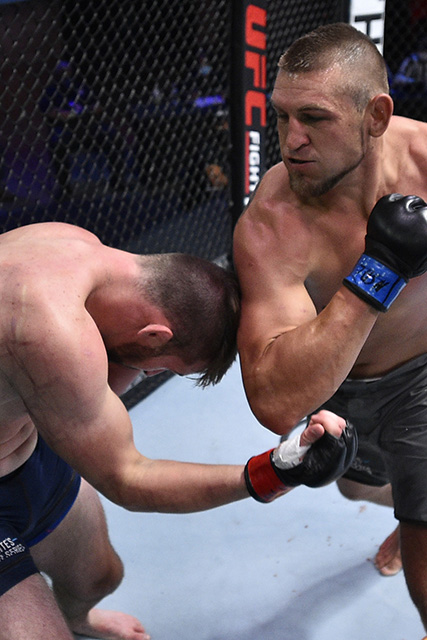 (+ Enlarge) | Photo: Getty/UFC
Jacoby hit Flores with the kitchen sink.
Flores works to close the distance, and the light heavyweights trade low kicks early. Flores changes levels behind a combination, but Jacoby shrugs him off. The kickboxer unloads with heavy shots against the fence, and Flores is bleeding. Flores circles away and Jacoby walks him down and tags him with more strikes near the fence. Flores shoots for a takedown to give himself a reprieve, but Jacoby lands some elbows to the side of the head as he defends. Jacoby uses a kimura to free himself. Jacoby closes the distance and they tie up. Jacoby backs his man up and lands a left hook. Flores is bleeding profusely, and he eats another two-piece from Jacoby. Jacoby has slowed a somewhat due to the tremendous pace he set. Two right hands from Jacoby have Flores reeling, and he falls to the canvas. Flores is on all fours as Jacoby fires away wit more right hands. Flores absorbs the punishment and works his way back up. They separate from the clinch, and Flores walks into a knee. Jacoby waes back into the clinch, and Flores brings up a hard knee to the face. They end the frame in the clinch as Jacoby appears to be tiring.

Flores strings together a combination, and he’s walking down Jacoby now. Jacoby opened the round with a cut over his left eye. Flores presses forward with heavy hooks, but he can’t find the range. Jacoby stuffs a takedown and turns Flores into the cage. Flores lands another knee in close while Jacoby peppers the body. Jacoby sticks a jab. Jacoby tosses Flores to the mat and locks up a front headlock. He bails on the position and lands a couple jabs before tying up his opponent again. Flores reverses and lands a knee to the body. The light heavyweights are content to remain in the clinch, with Jacoby controlling position. Flores frees himself, lands a takedown and takes Jacoby’s back. Jacoby is back to his feet, while Flores maintains a rear waistlock. Jacoby reverses position and takes control in the clinch. The action stalls and Herb Dean separates them with 10 seconds to go. Jacoby lands a front kick and one-two just before the horn.