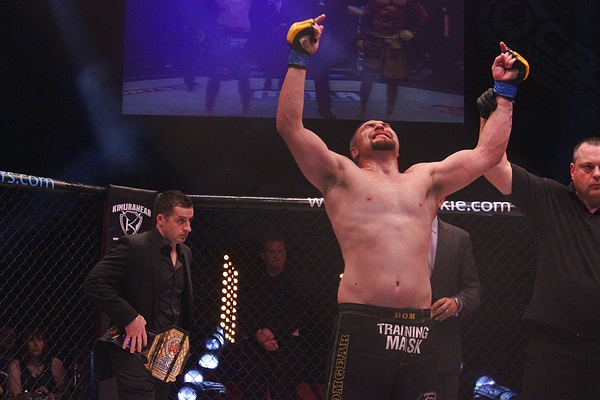 When he got the offer to fight Anthony Johnson, D.J. Linderman didn’t hesitate to accept. He never does, though.

“My manager has problems with that,” Linderman said with a laugh Monday during an appearance on the Sherdog Radio Network’s “Beatdown” show. “I’m the guy he calls with any fight and I’m like, ‘Yes.’ He’s like, ‘Take 15 seconds.’ I was like, ‘No, this is a name and this is something I’ve been waiting for, a big name like this.’ It’s going to stand me out in front of the world.”

Linderman meets Johnson on Saturday at the inaugural World Series of Fighting. The matchup is one of four main card bouts that will air live on NBC Sports Network. Prelims will be streamed live on Sherdog.com.

“This is the biggest fight for me mentally and physically,” Linderman said. “… It’s going to be definitely the toughest for sure. He has a lot of stuff to bring to the table as well as me.”

Of course, after accepting the bout, there was a moment when Linderman realized that he would be fighting an opponent who had considerable success in the UFC.

“It kind of kicked in once I got to my coach and was like, ‘Hey, coach. This is my opponent,’” Linderman said. “He looked at me and was like, ‘We’ve got some work to do.’”

Linderman didn’t disagree. His record is similar to Johnson’s, but Johnson has fought much better competition on a much bigger stage. That’s why Linderman sees the matchup as a huge opportunity, though.

“Especially them throwing me on a co-main event on their very first show and especially against Anthony Johnson, they want to see an extravagant show,” he said. “Not just a good show -- they want to see guys out there putting everything on the line, and that’s what I’m striving for. I’m going to give them everything I have.”

Linderman will enter the bout on a three-fight win streak. Johnson has also won three straight, including two in a row as a light heavyweight. The UFC veteran moved up to 205 pounds after struggling to make 170 and 185. He’s trying to work his way back to the Octagon, but Linderman will look to derail him Saturday in spectacular fashion.

“I’m going to come into this fight banging with him, exchanging, taking the war either on the feet or I’m going to take it to the ground, wherever I feel he’s weakest,” Linderman said. “He’s going to end up getting submitted. I can’t tell you how I’m going to do it, but it’s going to work out that way and he just better be prepared for it.”