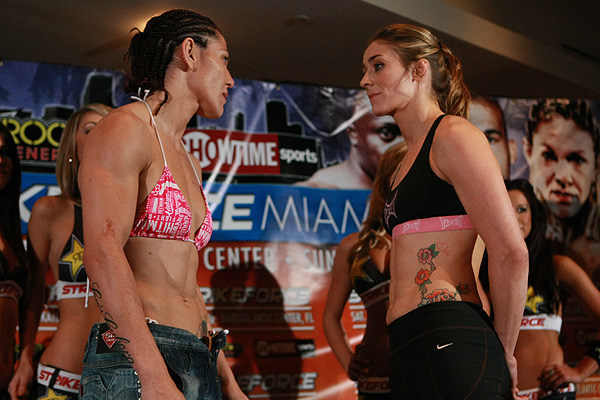 Former Strikeforce women’s champions Cristiane “Cyborg” Justino and Marloes Coenen will square off for the second time this summer in the main event of Invicta FC 6.

Invicta FC officials this week confirmed the matchup -- which will serve as Invicta’s inaugural featherweight title bout -- following Justino’s one-sided victory over Fiona Muxlow at Friday’s Invicta FC 5. While the all-female promotion’s sixth event does not yet have a date or location, the show is being targeted for late June or early July.

Justino and Coenen first collided under the Strikeforce banner at a January 2010 event in Miami. That fight saw the Brazilian retain her 145-pound title by stopping Coenen on third-round punches.

Coenen subsequently became Strikeforce’s 135-pound champion by defeating Sarah Kaufman. She defended the title once, against Liz Carmouche, before being submitted in her final Strikeforce appearance by Miesha Tate. Currently, the 32-year-old Dutchwoman is on a two-fight winning streak with victories over Muxlow and Romy Ruyssen.

Last week’s win over Muxlow was Justino’s first appearance in more than 16 months following a steroid suspension from the California State Athletic Commission. Despite having her December 2011 win over Hiroko Yamanaka overturned, Justino finished her Strikeforce run without a loss, finishing all five of her opponents.