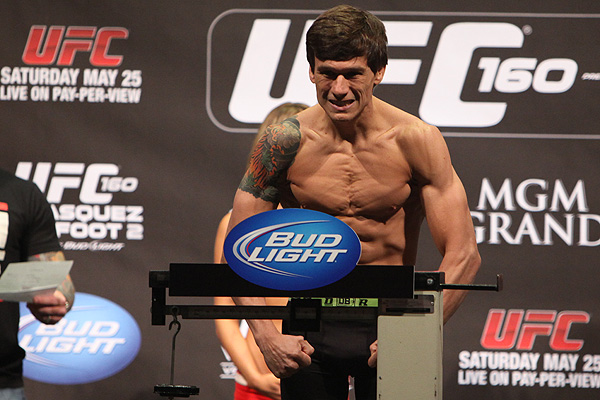 Brian Bowles failed his UFC 160 drug test due to an elevated testosterone to epitestosterone (T/E) ratio.

Nevada Athletic Commission Executive Director Keith Kizer informed Sherdog.com Friday of the UFC 160 drug test results. All 24 fighters were tested at the May 25 event, and all tests came back negative with the exception of Bowles.The bantamweight produced a T/E ratio greater than 20-1, more than three times Nevada’s allowable ratio of 6-1. A complaint against Bowles will be forthcoming from the NAC.

UFC 160 took place at the MGM Grand Garden Arena in Las Vegas and was headlined by a heavyweight title rematch pitting Cain Velasquez against Antonio Silva. Velasquez once again triumphed over “Bigfoot,” finishing the Brazilian with strikes just 81 seconds into the bout.

A former World Extreme Cagefighting bantamweight champion, Bowles competed on the UFC 160 undercard, suffering a second-round technical knockout to fellow WEC alum George Roop. The loss marked the second straight setback for the injury-plagued 32-year-old, who had not competed since November 2011 before returning to the Octagon last month against Roop.