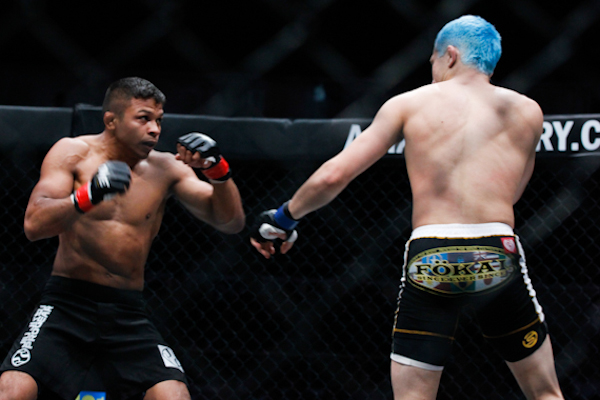 Promoted by Glory Sports International, the Dec. 31 event will also feature a single-night, 16-man heavyweight kickboxing tournament in addition to the MMA action. The show takes place at the Saitama Super Arena in Saitama, Japan, and is also expected to see former Shooto 154-pound champion Tatsuya Kawajiri and reigning Dream featherweight king Hiroyuki Takaya compete at the event, though their opponents have not yet been named.

A former two-division Dream champion, Fernandes captured the organization’s featherweight belt in 2009 but would lose the title the following year to Takaya. The Brazilian-born Canadian rebounded by winning Dream’s eight-man bantamweight tournament in 2011, stopping onetime WEC title challenger Antonio Banuelos to become Dream’s first 135-pound champ. Most recently, “The Flash” competed under the One Fighting Championship banner in August, outpointing Gustavo Falciroli at One FC 5.

Maeda, meanwhile, returned to the Deep promotion in 2012, capturing the Japanese organization’s bantamweight title from Takafumi Otsuka on Feb. 18 and defending it successfully in his most recent outing against Tatsumitsu Wada this past August. A veteran of Dream, Sengoku and Pancrase competition, Maeda is likely best known to American fans for his three-fight stint in the WEC in 2008, during which he challenged then-champion Miguel Torres in a hard-fought but unsuccessful title bid at WEC 34.

A Pride and UFC veteran, Kang, 35, has gone 3-3-1 since his 2009 Octagon departure. The 54-fight veteran recently snapped a three-fight skid in his last in-cage appearance, knocking out Korean talent Hae Suk Son at Road FC 8 on July 16.

Manhoef has competed for Strikeforce, K-1 Hero’s and Dream during his 17-year pro career. Known for his powerful standup attack, the former Cage Rage light heavyweight king most recently competed on Oct. 6 for One FC, knocking out middleweight King of Pancrase Ryo Kawamura in 4:40 at “Rise of Kings.”