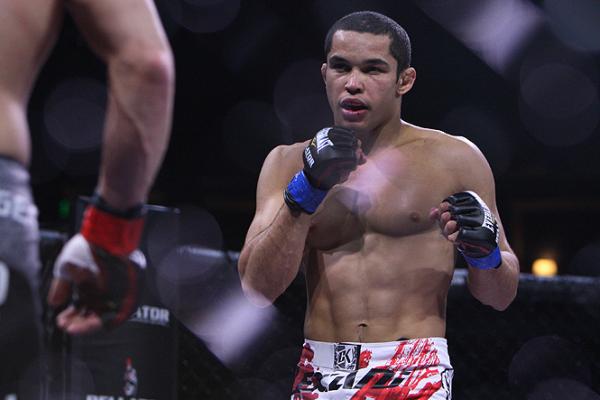 Sherdog.com confirmed Wednesday with sources close to the bouts that Alexandre Bezerra and Jeff Smith will collide at the Sept. 28 event, as will Brylan Van Artsdalen and Jay Haas.

Bellator 74 takes place at Caesars Hotel and Casino in Atlantic City, N.J., and features former 170-pound champion Lyman Good competing in the first round of the promotion’s upcoming welterweight tournament. The main card is expected to air on MTV2 immediately following the undercard stream on Spike.com.

Bezerra, 24, had an eight-fight winning streak halted by former Sengoku champion Marlon Sandro, who took a split decision from “Popo” in April’s Season 6 featherweight tournament semifinals. Born in Brazil but now representing Daddis Fight Camp in Pennsylvania, Bezerra has finished all but one of his 13 career victims by either knockout or submission.

Also 24, Smith tried out for “The Ultimate Fighter” Season 15 but was outpointed in the qualifying round by Jeremy Larsen. Ignoring that exhibition defeat, Smith has not lost since dropping his pro debut in 2009, posting 10 straight victories. The Blackman MMA rep last competed on July 14, outpointing D'Juan Owens at a Complete Devastation MMA event in Altoona, Pa.

Another fighter from Daddis Fight Camp, Van Artsdalen has seen all 10 of his career outings ended by submission. The 27-year-old has lost three of his last four, most recently succumbing to a Neil Johnson rear-naked choke at Bellator 71 in June.

Haas has lost three straight heading into his sophomore Bellator appearance. The featherweight was last seen at April’s Bellator 65, where he submitted to a first-round guillotine choke from two-time tournament vet Kenny Foster.