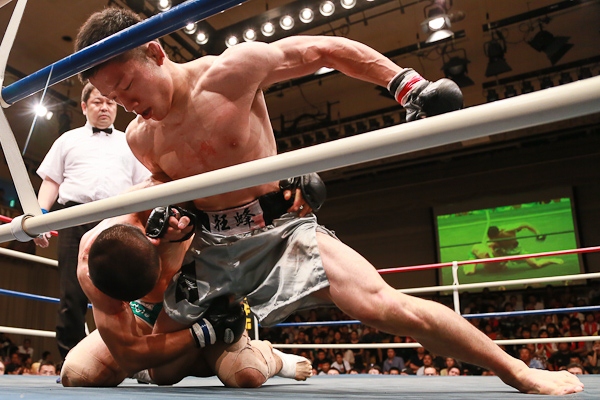 TOKYO -- After surviving two hellish rounds of powerful offense from Kyoji Horiguchi, Manabu Inoue’s comeback rally in the final frame brought Korakuen Hall to its feet. Despite his best efforts, however, the former bantamweight King of Pancrase couldn’t take out young prospect Horiguchi in the main event of Shooto “8th Round.”

The opening bell saw Inoue wisely work to take the fight to ground and avoid Horiguchi’s powerful striking. Horiguchi seemed too strong to handle, as he consistently defended takedown attempts and replied with powerful hooks that rocked Inoue and forced him to hold on for dear life.

In round two, Inoue managed to hit a strong double-leg, but quickly lost his position as the Krazy Bee standout reversed and smothered him from the half-guard. After a stand-up from referee Toshiharu Suzuki, Horiguchi landed a hard, straight punch that sent Inoue reeling backwards and running from vicious combinations. Inoue scored a reversal after being put on his back and pounded on Horiguchi until the bell came.

Round three seemed to start bad for the former champ again, as Horiguchi whipped Inoue to the ground with ease. Inoue began his comeback rally from there, reversing position yet again and methodically working through a tired Horiguchi’s guard to side control. Inoue smothered and pounded on his opponent to deafening screams and applause from the audience, taking Horiguchi’s back toward the end and working for the choke until the final bell.

The impressive comeback wasn’t enough to make up for the first two rounds, as judges Suzuki, Tomohiro Tanaka and Hiroyuki Kanno all scored the fight 29-28 in favor of Horiguchi.

“I should really train my grappling more than I do and not just focus on striking,” said the young winner, post-fight. “I grappled with him too much and it really took its toll on my stamina. I should have controlled the distance better in the stand-up. I got too close, and that allowed him to work for takedowns.”

Horiguchi’s Krazy Bee stablemate, Kotetsu Boku, had a much easier time in his fight against Shin Kochiwa. After a brief feeling-out period with Boku’s signature flicker jabs, he landed a huge right hook that put Kochiwa’s lights out just 67 seconds into the opening frame, a rare KO for the veteran out-boxer.

Another Krazy Bee youngster, 2009 Shooto rookie tournament winner Yusuke Yachi, had a technical, back-and-forth grappling match with former Shooto titleholder and WEC veteran Akitoshi Tamura that lasted all three rounds. Yachi controlled the takedown game through the match, but Tamura stayed offensive off his back, threatening with guillotines and omoplatas on multiple occassions. Yachi’s crisp hip-tosses earned the favor of the judges as he came up on all three scorecards, 29-28, 30-29 and 30-29.

In strawweight action, two former title contenders went toe to toe, as Yuki Shojo welcomed Hiroyuki Abe back to Shooto after a three fight stint in Pancrase. Abe landed huge belly-to-belly suplexes and single- leg takedowns to control the fight in the first two rounds. In the final frame, however, Abe spent most of the time on his back before standing up and scoring a leg trip towards the end of the round. The judges weren’t impressed with the flashy takedowns, and all three gave the fight to Shojo via 29-28 scorecards.

Earlier in the night, Ryuichi Miki survived a dangerous heel hook attempt from Fumihiro Kitahara and caught him with a stiff straight right that put Kitahara on the canvas. Miki followed up with a few short punches before referee Suzuki stopped the fight at 4:32 of round one.

In opening fight action, Yoichiro Sato used effective combination punching to exhaust and outpoint Yusaku Inoue, earning Sato a unanimous decision from the judges (30-28, 30-27, 30-27) and Nobumitsu Taison came back from an early knockdown to flatten Takanori Gomi disciple Akira Okada at 1:58 of the second round.