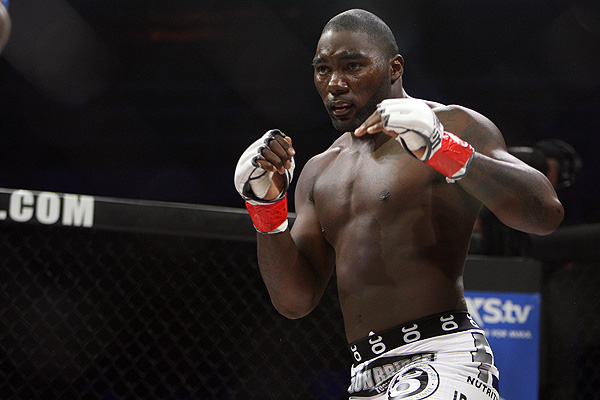 Anthony Johnson’s days as a welterweight appear to be long behind him, and the fighter says he is much happier as a result.

“I was always upset. I hated everybody if I was dropping to 170 [pounds], especially on weigh-in day,” Johnson told Sherdog.com after his knockout of D.J. Linderman at the World Series of Fighting’s debut event. “Everything happens for a reason. I don’t take back anything that happened in my past, because if it hadn’t happened back then, I wouldn’t be who I am right now. Moving to [light heavyweight] was definitely the best decision that I’ve ever made in my life.”

On Saturday night, Johnson competed in his fourth fight since receiving his UFC release this past January, knocking out Bellator veteran D.J. Linderman at the Planet Hollywood Resort and Casino in Las Vegas. The setup for the finish was one not seen often, as Johnson was the recipient of an accidental eye poke just moments prior. The Blackzilian began blinking badly, looking to referee Herb Dean for help. Dean, however, did not see the accidental foul and was unable to step in.

“Nothing was going through my mind except that [Linderman] poked me in the eye,” Johnson said of the sequence. “I looked over at Herb, and Herb said he didn’t see it. I respect him. He’s the best ref in the world. If he didn’t see it, then I respect that, because they don’t see everything.”

Next, Johnson says he heard Linderman’s corner urge the Californian to attack while “Rumble” gathered his wits. The advice proved less than helpful, as Johnson planted his back foot and countered Linderman with a straight right hand that instantly turned out his lights, causing him to fall limp, face-first on the canvas.

“I heard D.J.’s corner say, ‘Go get him,’ because they thought it was an opportunity. He just left himself open. I trained to step backward and punch at the same time, kind of like how Chuck Liddell used to do. We train that day in and day out,” said Johnson. “Usually when you knock somebody out, you don’t feel it. You just happen to hit them in the right spot, and that’s exactly what happened. I didn’t think he was going to fall the way he did. I don’t think he’s ever been knocked out or stopped like that. I think I was the first, so I’m proud of myself.”

Even after snatching the highlight reel finish, Johnson still complimented his opponent’s toughness during a first round in which Linderman ate several stiff shots from the hard-hitting Johnson, including a snapping high kick.

“[Linderman] is tough as nails. He took a couple of hits, and obviously he took a kick straight to the dome, and he didn’t drop. It surprised me,” said Johnson. “That guy has a hard noggin. He’s still a warrior, and I have nothing but respect for him.”