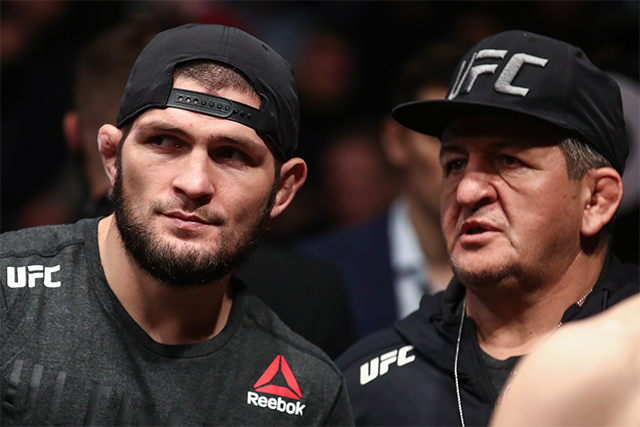 Abdulmanap Nurmagomedov, father of Ultimate Fighting Championship lightweight champion Khabib Nurmagomedov and a prominent figure in combat sports in his native Dagestan, has passed away in Moscow at age 57.

On Friday morning, Russian news agency TASS was the first to report the news, based on a Telegram post by Ramzan Kadyrov, Head of the Chechen Republic. According to the reports, Nurmagomedov's father contracted COVID-19 in his homeland in April, then was moved to a military hospital in Moscow, where he underwent heart bypass surgery. Shortly afterward, doctors placed him in a medically-induced coma and connected him to a life support machine. His condition deteriorated after a few days in which he was conscious and able to breathe on his own. Eventually, he died due to some health complications.

The reports are consistent with the periodic updates from the champion himself, who has stated that the COVID-19 pandemic has impacted multiple members of his family. The worrying situation led Nurmagomedov to rush to Russia in late March while training to defend his belt against at UFC 249.

The elder Nurmagomedov, a renowned trainer of MMA fighters and sambo practitioners, cornered his son in most of his fights, with the exception of those which took place in the United States, due to difficulties obtaining a visa. He was, however present at his son's latest Octagon appearance at UFC 242 in Abu Dhabi, when "The Eagle" reunified the UFC's lightweight championship with a third-round submission of interim champ Dustin Poirier. He also accompanied his son to the meeting in which he was congratulated by Russian president Vladimir Putin after defeating Conor McGregor in October 2018.