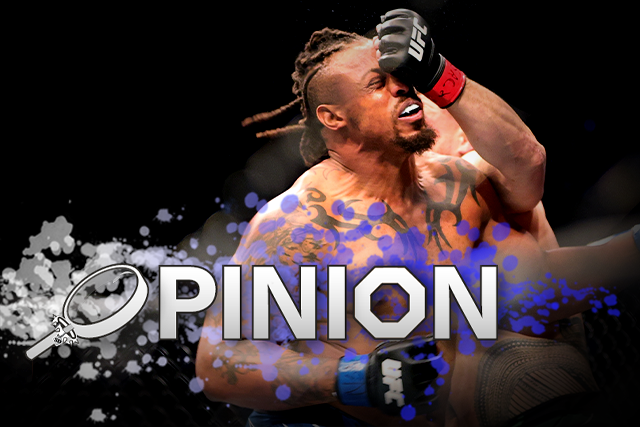 Visit any online discussion about MMA and one will come across hypotheticals about how “A-plus” athletes from other sports would do in a cage. How would LeBron James fare in the Ultimate Fighting Championship heavyweight division? What about someone like Karl Malone, a generation earlier? But the most common version, by far, is speculation about American football players. After all, football is a sport that blends raw physical strength with speed and agility, served with a hearty helping of violence. The very question seems to imply that the athleticism of footballers, who are paid tens of millions of dollars, must be vastly better than that of mixed martial artists, since some UFC champions make a meager $200-300k per outing. Thus, following this line of reasoning, if current top football players turned their attention to MMA, they should dominate the sport, right? There are two important variations on this argument. One claims that pro footballers would dominate if they quit football to concentrate on MMA, while others claim that they would have had to start early, maybe even their late teens, before they had become heavily invested in football. In this column, we will examine the first one, leaving the other for next week.

First, we have a concession to make. A much weaker version of either claim is absolutely true. Pro footballers, or those with the ability to become pro footballers, are vastly superior to the average person who decides to train in the martial arts and have a pro fight. They're stronger, faster and more athletic. In the heavyweight division, which has a much lower skill level than other divisions, and becomes downright dire outside of the UFC and Bellator MMA, merely being a 220-plus-pound human being who is strong, mobile and in decent shape is enough to beat most opponents. Pro football players are used to demanding physical training combining anaerobic and aerobic exercise, a must for MMA, and many are used to learning movements with their body that generate considerable power. Former UFC welterweight champion and Hall of Famer Pat Miletich once talked about how quickly the football players he worked with learned to throw a powerful punch or leg kick. In some cases, they were able to blast hard leg kicks after two weeks, something an ordinary aspiring fighter couldn't manage after months of training.

But notice how different this statement is to the original one. Stipe Miocic, Ciryl Gane and Francis Ngannou are not just regular Joes walking into an MMA gym. They too possess monstrous advantages over the average aspiring fighter. Sure, a good football player with a few weeks of training would thrash Phil Brooks and his five-plus years at Roufusport, but how does that stack up against solid pro fighters, let alone the best?

At this point, let's look specifically at how well pro football players have done in MMA, and see if we can extrapolate that to more generalized statements. Most fans will think of Brendan Schaub and Matt Mitrione here, but they actually don't apply. Schaub never played a single snap in the NFL, and Mitrione was an occasional defensive tackle whose entire career consisted of nine games during one season, where he recorded a whopping 8 tackles. Neither was an NFL starter, let alone star. Herschel Walker was a great player in his day, but his MMA career consisted of a couple of fights in his late 40s. Hard to tell what he would have achieved at a younger age.

In terms of significant, successful pro footballer who weren't very old when they tried MMA, I can think of only three. Let's look at each in turn.


A first-round pick in the 1996 NFL draft, Jones had a competent six-year, 85-game career as a defensive end and tackle, about half of those as starter. While not exactly a star, as a solid, multi-year starter he is much closer to a defensive legend like J.J. Watt or Reggie White than to Schaub or Mitrione.

Visually, Jones looked incredible, a 6-foot-6, 260-pound goliath with huge muscles and limited body fat. And it wasn't just show, either. The man was very athletic and strong, able to force opponents to the canvas and finish submissions through raw physicality alone, rather than technique.

Entering The Ultimate Fighter Season 10, he was 4-1 and ran through competent heavyweight fighters Mike Wessel and Darrill Schoonover on the show, taking them down and mauling them. But then, he was stopped in back-to-back fights by those same football failures, Schaub and Mitrione, both equally early in their MMA careers — earlier, in the case of Mitrione, who had no professional fight experience before the show. In both affairs, Jones had early success with his wrestling, but couldn't finish them the way he had done to past opponents, gassed hard and then was promptly knocked out. In addition to atrocious cardio, he displayed poor striking technique and defense. Even his wrestling wasn't technically sound, but his tremendous athleticism and strength made up for it.

After those two defeats, Jones retired. It showed a lack of passion for the sport. He enjoyed MMA so long as he was dominating opponents and getting close to bigger paydays, but when he was losing and getting knocked out, he suddenly decided to pursue other interests.


Westbrook was a more successful at football than Jones. Drafted fourth overall in 1995, he was a potential franchise star. While he didn't quite live up to that, in large part due to injuries, he had a very decent eight-year career, including a few where he put up gaudy stats, his finest being the 1999 campaign during which he amassed 65 receptions for 1,191 yards and nine touchdowns.

And yet, his heart never seemed to truly be in fighting. After winning some Brazilian jiu-jitsu tournaments and his first pro fight by rear-naked choke in 2005, he didn't have his sophomore outing until 2009. There, he lost by knockout to fellow 1-0 opponent Travis Browne, who certainly went on to have plenty of success.

Westbrook had stiff, flawed striking, reaching and even slapping with some of his punches, and while his grappling was better, it was nothing special. Looking at his infrequent activity and that he would fight only one more time after the Browne loss, a no contest, it's clear that he too wasn't that into MMA.


While he wasn't a first-round pick and his career was shorter, Hardy also reached greater heights than either Jones or Westbrook. After a monster 2013 season in which the defensive end recorded 15 sacks and 59 tackles, he was invited to the Pro Bowl and named a second team All-Pro. There was no doubt about it; Hardy was a star, one of the best in the league. And unlike Jones and Westbrook, who got involved in MMA in their early 30s, Hardy started training at 28, forced out of football after being found guilty — though the conviction was vacated on appeal — of brutally beating a woman with whom he had been involved.

Around the time Hardy debuted in the UFC, then 3-0 with all victories coming by finish in the first minute, I told a group of friends who were more casual MMA viewers that his best-case scenario was to become a slightly better version of Matt Mitrione. They laughed and told me I was selling him short. Part of that is likely ignorance of what Mitrione achieved. Not only does he hold a knockout victory over a GOAT candidate in Fedor Emelianenko, but Mitrione also needed just 41 seconds to obliterate two-time UFC title challenger Derrick Lewis a feat we recently celebrated Gane for taking over 14 minutes to accomplish.

Lewis certainly improved since that early loss, and Fedor was past his prime with no chin, but both were still dangerous fighters at the time, and it shows that Mitrione had success against very good opposition.

Part my friends' laughter was also too-high expectations on Hardy. After improving for a while, he seems to have hit a wall recently. Now 33 years old, he was taken down and finished by Marcin Tybura, a grappler, before being knocked out in a minute by Tai Tuivasa, a striker. On one hand, Hardy had his moments in both losses, badly hurting Tybura in Round 1 while fending off takedowns, and stunning Tuivasa. On the other hand, no one is confusing Tuivasa or Tybura for serious contenders. I doubt those friends would laugh at me calling Mitrione a best-case scenario anymore.

Hardy is far more skilled than Jones and Westbrook ever were. He has excellent athleticism, a nice combination of physical strength and speed for a man his size, and genuine knockout power in his right hand, whether the cross or overhand variant, powerful leg kicks, a heavy if untechnical left hook, and a very solid jab. His takedown defense is decent, too. Unfortunately, he has a slew of defensive flaws, a gas tank that has ranged from terrible to merely poor, a very weak ground game, especially off his back, and he clearly didn't like being hit, a detail I had noted long before the Tuivasa match.

What can we learn from these three examples? To me, they show that the idea of a footballer deep into a pro career becoming an elite mixed martial artist, even at heavyweight, is utterly laughable.

For one, many lack the proper mindset and passion to succeed, which is as large an aspect of the game as the physical side. Even Hardy, who is dedicated long-term to the sport, has often failed to improve at all from one fight to the next early in his career, and certainly learned little of the ground game by the Tybura fight, his 10th pro outing, after four years of training.

In his defense, however, this would be a challenging task even with the greatest dedication. There is simply no way to learn all the finer points of fighting so late in life. Hardy at 28 has essentially only learned how to strike, while simplifying grappling to takedown defense and striking defense to using his athleticism to jump back as quickly as possible. Mitrione, who also started MMA in his late 20s, was only marginally better, with a semblance of striking defense and a serviceable, if limited bottom game.

And it's no accident that Jones and Hardy had bad cardio. Their bodies were built to play defensive end in the NFL, not fight in MMA. They were simply too big and bulky for fighting, with the extra muscle sapping their energy reserves. Consider that Hardy is 6-foot-5 and struggles to make the 265-pound limit, presumably cutting from at least the 280 pounds he typically weighed as a football player. Meanwhile, Gane and Ngannou are close to the same height, but are usually in the 240s and 250s for their fights, respectively.

Even in terms of their outstanding athleticism, it didn't go nearly as far as one would think. Greg Hardy is a dangerous, dynamic striker, but nowhere near the degree that Ngannou and Miocic are. In fact, he isn't even any more dangerous and dynamic than Tuivasa is. And while Jones had some powerful, athletic takedowns, is there any comparison to a Curtis Blaydes or Daniel Cormier? Of course not. Westbrook, meanwhile, didn't especially impress in any regard. Believing that pro football players, even elite ones, can suddenly transition to MMA and dominate is laughable and insulting to the martial arts. However, what about the variation of this argument? That if someone like Jones, Westbrook or Hardy hadn't molded their body to play pro football and spent that same time and energy training to be a fighter from their late teens, they would have been champions? That's a much more interesting question, with a very different answer, which we will cover next week.