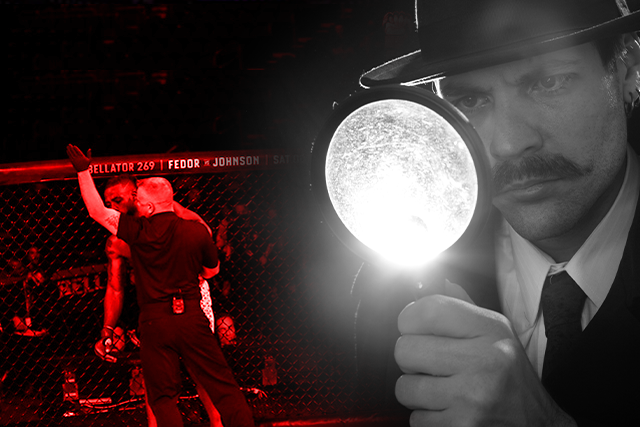 Often, we become so used to an aspect of our world that we cease to question it, despite how strange or counter-intuitive it is. With regard to MMA, that applies to modern fight cards by major promotions. The Ultimate Fighting Championship and Bellator MMA often aim for 13 fights per event. This has been going on for many years and few people question the thinking behind it. Yet, both historically and logically, it makes little sense at first. In the early 2000s after Zuffa bought the UFC, pay-per-view events would feature roughly eight total fights.

Even after the first season of “The Ultimate Fighter” elevated the popularity of the sport in general and the UFC in particular, UFC 69 in April 2007 featured just nine bouts. Looking at major boxing cards, we see similar numbers. While boxing matches often last longer than MMA contests, the Tyson Fury vs. Deontay Wilder trilogy fight earlier this month topped a seven-fight card.

Intuitively, this makes more sense than our current 13-fight affairs, which are simply too long for most people. I've attended several Bellator events in person, in some cases arriving for the first preliminary fight and leaving after the main event, and also regularly write Bellator play-by-play features for Sherdog. It usually works out to six hours. For most fans, that is too large a chunk of time. They may not have such a large portion of their weekends to continuously devote to MMA. Or they suffer from burnout, becoming tired of watching so much mixed martial arts. One may laugh at this, but a typical NBA game lasts two to two and a half hours and the average NFL broadcast lasts a little over three hours. And even then, it's difficult for fans of either league to sit and watch the entire game from beginning to end, either because of other time commitments or exhaustion. Meanwhile, major MMA cards are twice that length, and at six hours, one frequently needs at least one break to eat.

Indeed, this reasoning was supported by what I saw. When I would arrive to a Bellator card for the first prelim, the arena would be mostly empty. Most people who showed up were either friends, family, or training partners of one of the prelim fighters. The number of people unaffiliated with a fighter, like myself, was exceedingly low — no more than 100. The arena would then slowly but surely fill up until the co-main event. There were still people arriving when the main card was more than halfway done. Watching the crowd at UFC events even before the pandemic, it was a similar story. A mostly empty arena during the early prelims gradually filled all the way up during the main card.

Meanwhile, as I noted in last week's article, even among hardcore fans, virtually no one judges whether to watch an event based on early prelim fights unless they're gambling on them. They may watch and enjoy the resulting fight, but almost nobody looks at an upcoming UFC or Bellator card, sees the third prelim matchup and exclaims, “I have to watch this card now!”

So what the hell is the benefit of these incredibly long cards that virtually no fan sits through all of? Why not go back to cards with eight fights — or even fewer? Let me explain.

The reasons differ between UFC and Bellator, which is also reflected in their prelims. Bellator prelims often feature very inexperienced fighters, sometimes even making their professional debuts. A great example was Bellator 268 last Saturday, where the second fight featured 1-0 Sullivan Cauley facing 1-0 Deon Clash. Now, the event took place in Phoenix and both men were local Arizona fighters. As with other prelim fighters who aren't contracted with the promotion, Cauley and Clash were tasked with selling tickets to friends and family. I see a lot of MMA fans online decrying this practice, claiming it's beneath the dignity of a fighter. Now, let's set aside that even for champions, self-promotion is a vital component of their careers, or that it's hardly more dignified for fighters to kill themselves making weight, weigh in naked, or be poked and prodded by members of an athletic commission, all of which we take for granted. These fans miss the simple fact that it would be impossible for Cauley and Clash to compete on the card otherwise. At present, neither is a big enough name to attract fans on their own. Thus, their salaries would far exceed any financial benefit to the promotion. Only by selling tickets can they make their inclusion economically viable for Bellator.

Do these lower-level match-ups hurt Bellator in any way? Not really. Again, no one judges cards based on early prelims. For virtually every fan, it doesn't matter if an early prelims features the 100th best light heavyweight in the world, as in the UFC, or as in Bellator, only the 300th best light heavyweight. Moreover, the fights themselves can still be plenty exciting. Cauley won by a violent knockout at the end of Round 1. I enjoyed the fight, as I'm sure most other viewers did.

However, the purpose isn't only to sell tickets. This also gives Bellator an opportunity to give young prospects a chance to work their way up to stardom. Most don't pan out, of course, but some do. A.J. McKee has fought his entire career in Bellator and he debuted on a prelim at Bellator 136 in Irvine, for which he was also a local fighter. Had the promotion waited until he was 6-0, there is a good chance that the UFC would have taken him instead.

For the UFC, it's a little different. While fighters don't have to sell tickets directly, there is also an element of appealing to the local crowd. One will often see fighters put on cards near their hometown, including some who don't really merit being in the UFC at all. However, there are many early prelim fighters who aren't local nor do they sell many tickets. Certainly not enough to make up for the $10,000 they're being paid for salary alone, let alone the expenses for airfare, hotel, commission fees, medical, etc. The UFC is absolutely losing money on those fights, so why include them, especially when it makes for overly long cards?

Unlike Bellator, the UFC is making profit hand over fist. It can afford to take these relatively small hits in return for two things. The first one being content. They have a major deal with ESPN and the more hours of fighting they produce for the network, the better. I don't know the exact details of the contract, but there is likely a stipulation regarding the programming length they offer for both the ESPN streaming network as well as the ESPN television channel. It also helps build up their own streaming platform, Fight Pass. Moreover, some of their most exciting highlights and finishes come from early prelims. They're wealthy enough that they can take the short-term financial hit in return for the longer-term goal of building up more hours of content.

Secondly, the UFC wants to keep as many potential stars as it can under contract, especially if it can do so cheaply. Much better they do this than allow them to compete in a rival promotion. Consider that Stephen Thompson made his debut on the very first prelim of UFC 143. If the UFC had fewer fights per card, he might not have fought and that would have given another promotion a chance to snatch him up.

Thus, we see that while illogical at first, there are sound reasons for why the major promotions have such long prelims. For Bellator, it's an opportunity to make money and build up major stars from scratch, keeping them from the UFC. For the UFC, it is a loss leader: a financial sacrifice to expand its fight library for itself and its broadcast partners, while also keeping more established fighters from jumping ship.
« Previous Next »