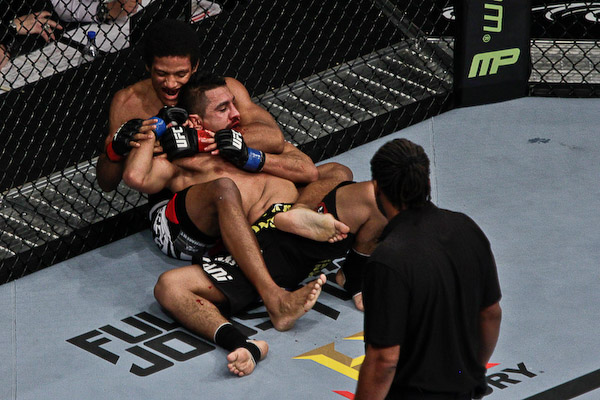 Before Mark Munoz, Chris Weidman and the rest of the primetime players hit Fuel TV on Wednesday, the undercard competitors will scrap it up on the Facebook stream for your amusement. Here are five reasons to either find an Internet connection or show up at the HP Pavilion in San Jose, Calif., to catch the UFC on Fuel TV 4 “Munoz vs. Weidman” prelims:


In the words of Apollo Creed, it sounds like a damn monster movie. Although the fight itself probably will not live up to the superhuman standard set by Rocky Balboa’s first meeting with “The King of Sting,” it still amounts to a bantamweight collision worth your time.

On one side of the cage stands Alex Caceres, a young man who, up until recently, had made his name simply by sporting one of the more memorable gimmicks in “The Ultimate Fighter” history. That has changed since his drop to bantamweight, where the 24-year-old has acquitted himself much better than in his two-fight stint at 145 pounds. After cruising to a unanimous decision victory over former World Extreme Cagefighting champion Cole Escovedo, Caceres also looked on point against Edwin Figueroa, minus a stream of unintentional low blows that cost him two points and resulted in a split decision loss at UFC 143 in February.

Meanwhile, Damacio Page has lost three straight and is still searching for his first Octagon win. The Jackson’s Mixed Martial Arts product returned from injury in April, fighting his heart out but ultimately submitting to the ever-improving Brad Pickett.

While neither man is close to the bantamweight title picture, both fighters have been known to throw caution to the wind in the past, even to their own detriment. Page must be desperate for a win, and Caceres must know his baby-faced grin will not save him from the ax if he cannot string together more wins at 135 pounds. Neither man can afford to lose.


In terms of trying to think of a good word to describe Josh Ferguson’s upcoming fight with Chris Cariaso, how does “spunky” grab you?

If you have not figured it out by now, flyweights are all the rage these days -- and for good reason. Just look what Ferguson’s “The Ultimate Fighter” Season 14 castmates John Dodson and Louis Gaudinot did in their flyweight debuts with the company. If you are a fan of the little guys, then you probably hope Ferguson performs in a similar manner now that he has returned to his natural weight class.

Cariaso made the decision to cut to flyweight without any real provocation; the man was doing just fine at 135 pounds. In his six-fight Zuffa LLC career, Cariaso has lost twice, submitting to Renan “Barao” Pegado and then dropping a split decision to rising stud Michael McDonald. Riding back-to-back wins, the 31-year-old now appears primed to do some serious damage in the UFC’s newest division.

Honestly, if you are not at least a little excited about watching “Taz” and “Kamikaze” throw down with all that wild, flyweight chutzpah, then we are probably not going to be friends. 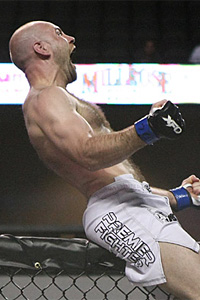 In case you forgot, the Midwest Training Center rep made his UFC debut in February, stepping up on short notice to replace “The Ultimate Fighter” Season 13 alum Justin Edwards at UFC 143. In the other corner stood then-unbeaten kickboxing champion Stephen Thompson.

Things went poorly for Stittgen, who looked out of place as he tried to close the distance on his longer foe, only to find the “Wonderboy” continually out of reach. Thompson took his time with the submission specialist, showing little respect for Stittgen’s comparatively nascent standup skills before sneaking a high kick over his opponent’s left shoulder and putting Stittgen to bed near the end of round one. While those who heard the audible smack of Thompson’s foot colliding with Stittgen’s cheek will not soon forget it -- think toy baseball bat meeting one of those butterflied karate pads that looks like a wineskin -- one has to imagine Stittgen is all too eager to move forward and give fans something else by which to remember him.

He will have his chance when he meets Jungle Fight middleweight champion Marcelo Zilio Guimaraes. Known mostly for his top game and ground-and-pound, “Magrao” used a more aggressive submission attack in his most recent outing to capture the Jungle Fight title, choking Lucas Rota unconscious in August with a rear-naked choke. Now dropping to welterweight, Guimaraes looks to follow in the footsteps of fellow Jungle Fight champs Erick Silva and Iuri Alcantara by posting a win in his UFC debut.

Will Stittgen perform better when paired with another grappler or will “Magrao” hand him another loss and potentially a ticket back to the minors?


Rafael Natal is definitely improving, but it remains unclear if he will ever graduate to the upper echelon of the middleweight division.

The native Brazilian began his UFC career 0-1-1, falling to Rich Attonito in his Octagon debut and then allowing Jesse Bongfeldt to earn a majority draw after fatiguing greatly down the stretch in their UFC 124 meeting. Since those bouts, “Sapo” has won back-to-back fights, outpointing Paul Bradley in August and then doing the same to previously unbeaten Dutchman Michael Kuiper at UFC 143.

Though he showed a variety of skills both standing and on the mat, Natal got cracked by both Bradley and Kuiper -- not a good sign, even if he did walk away with those decisions. The silver lining: Natal appeared to fatigue in the Kuiper bout and still managed to finish the fight strong, nearly cinching an arm-triangle as the final horn sounded.

Now he must contend with former Legacy Fighting Championship middleweight titleholder Andrew Craig. The undefeated Texan impressed in his UFC debut in March, walking into hostile territory and outlasting hometown favorite Kyle Noke at UFC on FX 2. Craig may not be the most skilled guy in the world, but he is a game one, to be sure.

Will “Sapo” make a statement and show he is ready to step up his level of competition or can Craig keep his undefeated streak alive and become a person of interest at 185 pounds?


The door is open for Issei Tamura.

After fighting his entire career in Japan’s Shooto organization, the Krazy Bee representative made his UFC debut in February, replacing Leonard Garcia against Chinese featherweight Tiequan Zhang at UFC 144. Tamura’s tight boxing attack ultimately spelled Zhang’s demise in the second frame, as he launched a deadly overhand right that found its mark and decisively turned out Zhang’s lights.

Despite his one-sided finish of Zhang as a featherweight, Tamura will now drop to 135 pounds in order to face another recent addition to the bantamweight ranks: Raphael Assuncao. A five-time WEC veteran, Assuncao has amassed a 4-3 record under the Zuffa umbrella, with his three defeats coming to contenders Urijah Faber, Diego Nunes and Erik Koch.

It is no secret that the UFC is constantly looking to build international stars to draw money abroad, and, right now, the organization is staring at a problem. Most of the Japanese roster is either on the decline (see Takanori Gomi and Norifumi “Kid” Yamamoto), struggling to find consistency (see Yoshihiro Akiyama and Takeya Mizugaki) or unable to get over the hump (see Yushin Okami and Hatsu Hioki). Can Tamura top Assuncao and take another step toward building his name with the UFC?