TOKYO -- Kenichiro Togashi outperformed Ganjo Tentsuku for the second time in as many meetings in the Shooto “Gig Tokyo 1” main event on Saturday at Shinjuku Face.

Five months shy of the four-year anniversary of their first bout, Togashi (8-6-5) once again outboxed Tentsuku en route to a sound decision. The southpaw found the key to victory in his right hand, as he used it to stuff jabs and hooks into the face of the forward-pressing Tentsuku (9-4-2).

It became clear from the outset that the hot-blooded Tentsuku would do little else than press forward with big punches. Thus, Togashi took advantage of this strategic liability, and with Tentsuku opting for a boxing match, Togashi had no incentive to stop stuffing his right hand in his opponent’s face. Tentsuku had no answer for the jabs, other than to grunt and make fierce faces while pushing forward and swinging with more punches. Togashi slipped and evaded most of them easily, only to get tagged by them in the latter half of the bout.

Outside of excellent body punches and an early knockdown in the first round, Tentsuku did less significant damage than Togashi. For every punch that Tentsuku landed in the later rounds, the cool-headed Togashi landed at least two more, bloodying his foe’s nose and sealing up his left eye with the harrying jabs.

In the co-main event, Takeshi Sato made surprisingly quick work of Shinya Murofushi, as he choked him out just beyond the first minute. 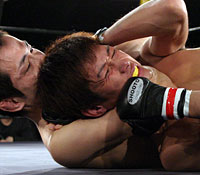 Stephen Martinez/Sherdog.com
Sato vs. Murofushi.
After trading low kicks, Sato (8-6-1) careened into Murofushi for the clinch and, in the ensuing scramble, captured Murofushi’s back. Because Sato’s hooks were not firmly in, it appeared as though the previously unbeaten Murofushi (5-1-1) had a good chance to kick out and reverse into his guard. However, Sato snuck in the hooks and sank the choke for the tapout 1:14 into the match.

Other bouts were not as decisive.

Komei Okada and Shinobu Miura fought a kickboxing bout, despite an early first-round takedown from Okada.

Grazing each other with big punches and trading punishing kicks to the body, the two men were even in the stand-up department until Miura (2-4-4) pulled ahead with his sharper counters. He boxed up Okada’s left ear with crisp right hooks when he careened into him with grazing combinations. Though Miura appeared to land more blows than Okada (5-8-2) in the latter half of the bout, only one judge scored the fight in his favor, 20-19; the two remaining judges ruled it a 19-19 draw.

Meanwhile, Hisaki Hiraishi took a lackluster but technical unanimous decision from Koichi Taguchi, as he picked away at him with well-placed counters.

For all of Taguchi’s attempts to decapitate his adversary with powerful punches, Hiraishi’s head proved too mobile to be caught, until the last two minutes of the second round. Between evading, Hiraishi (5-3-1) racked up points with intercepting jabs and left hooks and bloodied up Taguchi’s nose en route to the unanimous decision. Scores were 20-19, 20-19 and 20-18. Taguchi (1-4-1) has dropped four straight.

In 154-poound rookie tournament action, Junpei Chikano advanced in the draw with a questionable unanimous decision against Yohei Ota.

Chikano apparently edged Ota (0-1) in the second round after a lackluster opening frame. Chikano’s forward momentum and aggression seemed to impress the judges, despite his opponent’s advantages on the mat. All three judges scored it 20-19 for Chikano (2-4).

Elsewhere in the 154-pound tournament, Norio Tokuhisa and Koji Nishioka fought to a majority draw after splitting two rounds.

Though Tokuhisa (0-0-1) had better position and takedowns in the first round, Nishioka remained offensive, punching from the bottom and attempting armbars. Nishioka (0-0-1) stopped the takedowns in the following frame and took Tokuhisa’s back, as he threatened with punches and chokes. Two of the judges ruled the bout 19-19; a third sided with Nishioka by a 20-19 count. However, all three judges voted Nishioka to advance to the next round of the tournament.

Another tournament bout ended with a bang.

Munehiro "Mike" Kin knocked out Fumihiko Kawamura’s with a left hook for a quick first-round stoppage. Both fighters took to the ring looking for the knockout punch, but Kin (1-1) scored first with a thudding hook that sent a rubbery Kawamura (0-1) into the ropes and out of the fight 1:43 into the opening frame.

In the 132-pound rookie tournament, Yuki Yasunaga tried to take a quick win from Yoshihiko Matsumoto, but his punches came up short as he charged straight forward. Matsumoto (1-0) had a surprise for Yasunaga (1-0), however, as he caught a punch, pulled him into a triangle choke attempt and quickly turned it into a fight-ending armbar. The tapout came 1:11 into round one.

The show’s only 123-pound rookie tournament match went Yasutaka Ishigami’s way. He defeated Yuya Kaneuchi, as he used superior wrestling to control the action on the ground. Ishigami (1-0) tagged Kaneuchi (0-2) from the guard and side mount and debuted with a handy 20-18 unanimous decision.